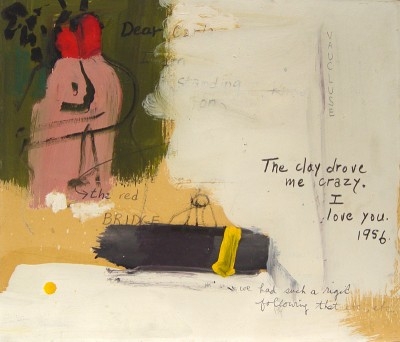 Figurative artist Larry Rivers was born on August 17, 1923 in the Bronx, NY with the name Yitzak Loiza Grossberg. He was the son of Ukrainian Jewish immigrants Samuel and Sonya Grossberg. Larry Rivers grew up playing the piano as a child and then switched to the saxophone as a teenager. He began his artistic career playing the jazz saxophone in jazz bands. His name was changed when a nightclub comedian introduced his group as “Larry Rivers and the Mudcats” at a local New York City pub. He decided to keep the name.

Larry Rivers supported himself for several years as a musician and spent a brief period in the U.S. Army Air Corps during World War II. He attended Julliard School of Music for one year before returning to the jazz saxophone. After he met the painter Jane Freilicher who introduced him to the world of visual art, Larry Rivers decided to devote himself to painting. In 1947-1948, the artist studied painting with Abstract Expressionist Hans Hofmann at his art school in New York and Provincetown, MA. Then, Larry Rivers enrolled at New York University to study fine arts with the aid of the GI Bill. During this period, he also had the opportunity to study with Abstract Expressionist William Baziotes.

In 1949, the artist had his first solo show at the Jane Street Gallery, an artist’s co-op in the Village. Larry Rivers received favorable reviews and was invited to join the Tibor de Nagy Gallery uptown. In 1951, he earned a BA from New York University in art education, but he chose to become an artist full time instead of a teacher as he had planned. Instead Larry Rivers developed a career that focused on painting, but included music, stage design, acting, filmmaking, writing poetry and prose.

He was a facile draftsman whose artwork formed a connection between the Abstract Expressionism of the 1940′s and 1950′s and Pop Art in the 1960′s. Larry Rivers belonged to the second generation of the New York School of painters. Unlike most of his contemporaries, the artist stayed away from abstraction instead preferring narrative paintings. A post-Abstract Expressionist, Larry Rivers was one of the first artists to rebel against the pure abstraction movement and inject recognizable figurative subjects into his painting. He established a middle ground between Abstraction and Realism and combined blurred images with precise lines.

Larry Rivers was very much a part of the leading-edge New York art scene. He continued to show annually at the Tibor de Nagy Gallery from 1952 to 1962. During his career, he was fascinated by great painting. The best known paintings of Larry Rivers were his versions of some of the most famous paintings by masters such as Ã‰douard Manet, Rembrandt and Emanuel Gottlieb Leutze. In 1955, The New York Museum of Modern Art acquired the painting Washington Crossing the Delaware and in 1956 the Whitney Museum purchased Double Portrait of Berdie which are two of the more famous Larry Rivers paintings. In 1957, he also began making welded steel sculpture. In 1963, the artist joined the Marlborough Gallery where he stayed until his death. He had periodic museum shows in Europe and the United States throughout his career.

In 1945, the artist married Augusta Burger and they had a son Steven and Joseph was her son from a previous marriage. In 1961, Larry Rivers married Clarice Price and had two daughters Gwynne and Emma. In the 1970′s, he had another son Sam with the painter Daria Deshuk. The subjects of the figurative paintings of Larry Rivers were family, history, politics, religion and sex. His oil paintings often included the use of stencils, cutouts, blank canvas and image reversals. He often painted family members including his mother in law, his sons and his ex-wife.

Larry Rivers favored historical subjects such as History of Matzoh: The Story of the Jews (1984-1985), History of the Russian Revolution (1965) and often painted parodies including his Washington Crossing the Delaware. The artist enjoyed controversial subjects and shocking the public. Larry Rivers paintings such as Lapman Loves It (1966) is a nine foot electrified assemblage complete with strategically located light bulbs and French Vocabulary Lesson (1961-62) is a nude with body parts labeled in French.

He was also a writer. In 1979, Larry Rivers published Drawings and Digressions with Carol Brightman. In 1992, the artist published What Did I Do? The Unauthorized Autobiography with Arnold Weinstein. During his career, Larry Rivers resided and maintained studios in New York City, Southampton, NY and Zihuatanejo, Mexico.

Larry Rivers died on August 14, 2002 of liver cancer in his home in Southampton, New York.