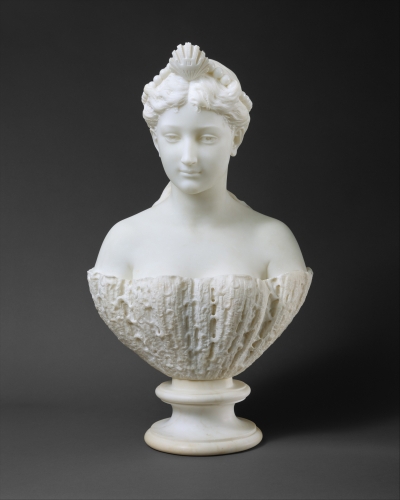 Born in New Hampshire and raised in Brattleboro, Vermont, Larkin Mead became a sculptor whose work is in Springfield Missouri at the Lincoln Memorial and the Oak Ridge Cemetery, and at the U.S. Capitol in Washington DC. (“Ethan Allen”).

In 1853, he traveled to New York City, where he worked for two years in the studio of sculptor Henry Kirke Brown

For the first year of the Civil War, he was an artist for “Harper’s Weekly”, and in that capacity spent time with the army of the Potomac.

From 1862 to 1865, he lived in Italy with his brother-in-law, who was the United States consulate in Venice. There he met other American sculptors including Hiram Powers, Thomas Ball, and Joel Tanner Hart, and during this time, he created works from mythology and Civil War subjects.

He brought a number of these sculptures to the United States when he returned briefly in 1865. That year he he received a commission to design the Lincoln Memorial at Springfield, Illinois. He then became a resident of Florence, Italy, but made so many return trips to the United States that he was able to maintain a top reputation in that country.

For the 1893 World’s Columbian Exposition in Chicago, he designed and executed the decorations of the Agricultural Building, a commission that resulted from his brother, William Rutherford Mead, who was part of the prestigious New York architectural firm of McKim, Mead & White.

His first important work was “Ceres”, representing the state of Vermont, and the work is at the Vermont Capitol Building.