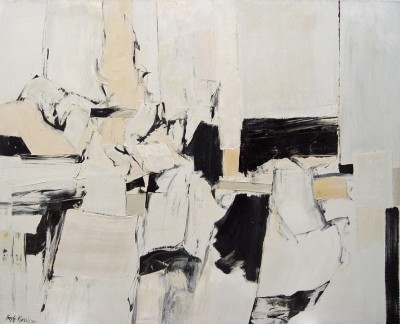 An Abstract Expressionist painter, Kyle Morris described his paintings as being the suggestion of that which shapes “a sense of the mutability and constant change which is the force and life in nature.” (Herskovic 230).

Morris was from Iowa, lived primarily in New York City but had teaching positions in Columbia, Missouri at Stephens College from 1940 to 1941; at the University of Texas in Austin from 1945 to 1946; the University of Minnesota in Minneapolis from 1947 to 1951; and the University of California at Berkeley from 1952 to 1954.

Exhibition venues include the Walker Art Center in Minneapolis, Des Moines Art Center, and the San Francisco Museum of Art.

Sources include:
Peter Falk, “Who Was Who in American Art”
Marika Herskovic, “American Abstract Expressionism of the 1950s”