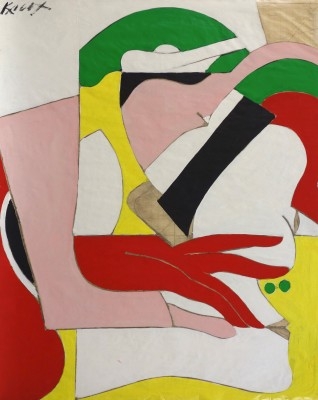 A geometric abstractionist, Knox Martin has been active in New York City where one of his pieces is a huge wall covering mural, painted in 1970, on the wall of the Bayview Correctional Facility on West 19th Street.

He studied at the Art Student’s League of New York from 1946 to 1950. Mr. Martin has received an NEA Grant, Pollock-Krasner Grant, Gottlieb Grant, CAPS Grant, and Longview Fellowship.

He taught at Yale Graduate School of the Arts, first as visiting critic in art, and then as Professor of Art. He also taught at New York University, the University of Minnesota, and the International School of Art in Umbria, Italy. He teaches master classes at the Art Students League of New York and is a member of the National Academy of Design.

He was also in the Navy in WWII and served as a landing craft operator with the first wave at Omaha Beach in Normandy in June 1944. He was born in Barranquilla, Colombia and his father was the first man to ever pilot an aircraft over the Andes.