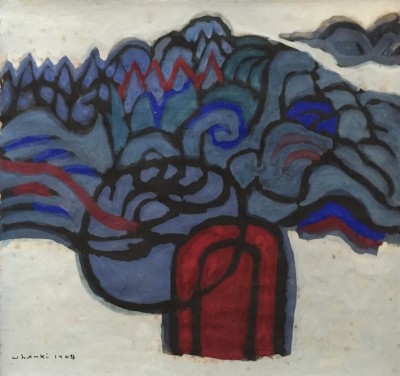 Kim was a pioneer of Abstract Art in Korea and was included in the Association of Free Artist Exhibition in Tokyo. In the 1950s, while he was living in Paris, Kim turned to traditional Korean subject matter, such as mountains, plum blossoms, and Joseon dynasty porcelains.

A leading figure of the first generation of Korean abstract artists, from the mid-1930s Kim Whanki shaped a distinctive style by grafting Korean lyricism into modernist art practices. In 1943, Kim, along with some fellow Japanese-trained painters, formed a group called the New Realist School whose style combined realistic forms and abstract structures. Kim’s influential status in Seoul’s artistic community led him to serve as a professor at Seoul National University and Hongik University, Seoul. In his earlier works, ceramics, traditional symbols, semi-nude women, and natural motifs were core subjects. The objects were rhythmically rendered in geometrical shapes, terse lines, and simplified colors and forms.

In 1963, he moved to New York and began a series of large-scale, Abstract paintings that were composed of dots and lines. Many of his works during this period are untitled or titled by date of completion. Since the mid-1960s, he gradually eliminated recognizable images, and his work took on a monochrome hue. Dots of many sizes enclosed by layered squares and lines drawn toward different directions suggest islands on the sea or clouds in the sky, which engendered thematic continuity with previous works. The highly refined formal expression and a meditative sense of color in Kim’s paintings earned him formidable acclaim both at home and abroad.

The majority of his work is currently held by the Whanki Museum in Seoul, Korea.