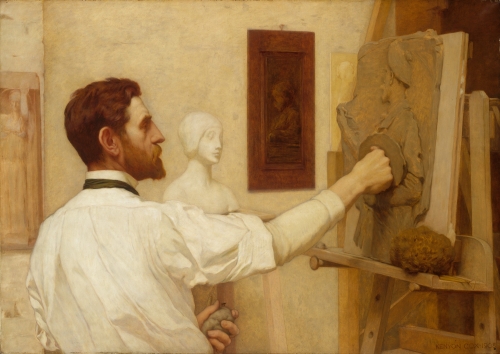 Born in Warren, Ohio in 1856, Kenyon Cox was considered one of the finest draftsmen of his day. He did easel paintings, portraits, and illustrations for books and magazines, but it was for mural paintings that he became best known. The murals, classically inspired, simple in composition and muted in color, were commissioned for public and collegiate buildings in many parts of the country. His mural installations, many of them done in his studio in Cornish, New Hampshire, include venues at the Library of Congress, the Appellate Court House in New York City, and the Essex County Court House in Newark, New Jersey for which he used actress Ethel Barrymore as a model.

Cox, a proponent of Classical Realism, is also remembered for his scathing written attacks on the New York Armory Show of 1913, with its introduction of modernist art to America. He found the work “heartrending and sickening” and Cubism “nothing else than the total destruction of the art of painting.” (Colby)

Cox studied at the McMicken School of Drawing and Design in Cincinnati, Ohio, where he became enamored with the vitality of the work of Mariano Fortuny, and wanted to go to Paris to study with Fortuny followers. His parents demurred, and sent him to Pennsylvania Academy of the Fine Arts in Philadelphia. Cox considered the Academy instruction stodgy, and in 1877 he went to Paris.

The Fortuny circle had waned by that time, and he decided to study with Carolus-Duran, whose vigorous style had attracted John Singer Sargent, among others. He took courses with Alexandre Cabanel, and at the Ecole des Beaux-Arts, he chose to study with Jean-Leon Gerome, whose work, ironically, he had dismissed as “artless” only two years before.

The World’s Columbian Exposition in Chicago in 1893 finally provided Cox with an opportunity to paint murals on a grand scale. It also gave impetus to a much broader interest in murals for public spaces. From then until 1913, Cox created a series of monumental allegorical murals. He was also a long-time teacher at the Art Students League and the National Academy of Design and was an art critic, writing for the Nation and Scribner’s. He did much of his writing in Cornish, New Hampshire where he and his wife, Louise Howland Cox, were a part of the Art Colony.

Source:
Michael David Zellman, 300 Years of American Art
Virginia Reed Colby and James B. Atkinson, Footprints of the Past