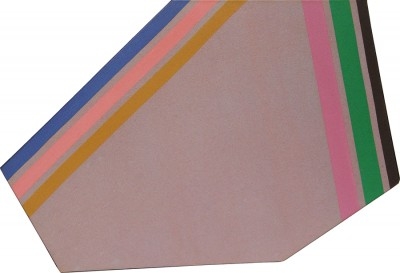 Kenneth Noland was born on April 10, 1924 in Asheville, North Carolina; his father was an amateur painter. He studied with Abstractionists Ilya Bolotowsky and Josef Albers at Black Mountain College. Kenneth Noland was a member of the group of Color Field abstract painters promoted by the New York Times critic, Clement Greenberg. He taught at the Institute of Contemporary Arts, at Catholic University in Washington, DC and at Bennington College.

The artist rarely painted on canvases smaller than 4 ft. by 4 ft. His choices range from mural size to mere slivers, from having the standard four sides to irregularly shaped profiles, from stained surfaces to thickly textured ones. Yet Kenneth Noland did not want machinelike perfection; he deliberately left the splatter of orange on yellow in one of his paintings. He dared to parallel magenta, russet, beige and maroon and other combinations of color in a lollipop war of taste. Kenneth Noland’s most striking contribution to the art of the 1960′s was his mastery of color.

Kenneth Noland and his wife, art historian Peggy Schiffer, lived north of Manhattan in a large, white, clapboard house with spreading grounds and a sculpture garden. He worked in a red barn on the property. Kenneth Noland redesigned the space to make room for many related activities, among them the rag paper he made by hand in the basement.