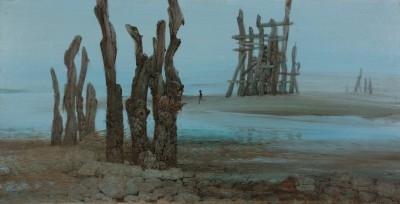 Corriendo a Solas (Running Alone), circa 1970

Juvenal Sanso was born in Reus, Catalonia, Spain in 1929 and five years later moved to Manila, Philippines where his family had a wrought -iron business. He studied under private tudors until he entered the University of Philippines School of Fine Arts as a special student.

In 1951 Sanso won several major awards for his art which enabled him to further his studies in Rome, at the Academia di Belles Artes. He also enrolled at l’Ecole Nationale, in Paris. His first one man show was held there in 1957.

Since that time his art has been the subject of major exhibitions in the United States, England, Italy, France and Mexico. Sanso currently resides in both Manila and Paris.

Both as an original print maker and as a painter, Sanso has artistic technique, which has been termed as ‘poetic surrealism’. This is particularly so in his landscape compositions where he is often drawn to solitary swamps and tidal flats. Combining consummate draftsmanship with intricate delineations, he creates both a strange and fascinating world containing elements of both dreams and realities.

Lueurs (Twilight) was commissioned by the Print Club of Cleveland in 1963 and published by them in a signed limited edition of 250 impressions. Founded in 1919, the Print Club of Cleveland was one of the first American organizations to promote original printmaking. During its long life it annually commissioned one original lithograph or etching from a major artist. Besides Juvenal Sanso, such masters as Henri Matisse, Mark Tobey and Salvador Dali contributed original prints to the club.