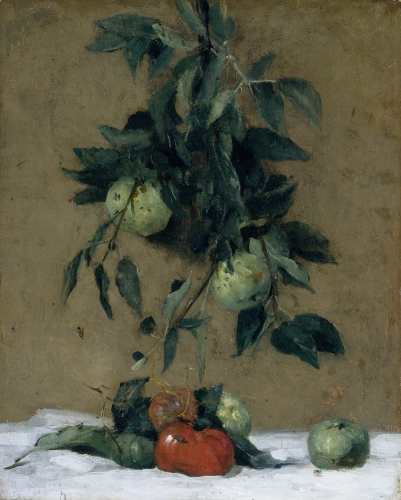 The youngest of sixteen children of Robert W. Weir, artist and art instructor at West Point Military Academy, J. Alden Weir became one of the leading early American Impressionists. However, his art education began with training in the traditional basic styles and methods from his father. Throughout his career subject matter included landscape, still lifes, and portraits. Although his landscapes increasingly reflected his adoption of Impressionism, his portraits and still lifes remained more realistic and conservative.

Weir also completed murals including ones in the Liberal Arts Building of the 1893 Chicago Exposition. They received much acclaim, but mural painting was not a specialty for him.

At 18, he enrolled at the National Academy School in New York. From 1873 to 1877, he studied in Europe, part of the time in Paris with Jean Leon Gerome at the Ecole des Beaux Arts. From Gerome, he learned much about classical figure painting and the modeling of forms. Weir also had much admiration for the Old Masters such as Frans Hals and Hans Holbein.

Friendship with Jules Bastien-Lepage, French plein-aire painter, encouraged Weir to work directly from nature, which became a modification of influences of the Beaux Arts training he was receiving at the Ecole. It was also the beginning of his path to Impressionism, although when first exposed to this revolutionary style, he was highly disapproving. Of his first encounter with it at an exhibition in Paris, he wrote home to his parents: “I never in my life saw more horrible things. . . .It was worse than the Chamber of Horrors. . . .I was mad for two or three days, not only having paid the money but for the demoralizing effect it must have…..”(Gerdts 105)

However, increasingly painting by Weir reflected this new style, beginning when he and Bastien-Lepage painted outdoors together, concerning themselves with atmospheric light and everyday subject matter such as peasants working in the fields. Another influence was friendship with James MacNeil Whistler, known for his loosening of style and dark tonalities.

In the 1880s Weir focused on still-life painting along with landscape, especially florals in a rather dark palette, which at the time of their creation were counter to his increasing interest in Impressionism. He also was a portrait painter and in 1883, married one of his models, Anna Baker.

After 1883, he had a New York studio at 51 West Tenth Street and supported himself and wife with portrait painting and teaching. He became associated with the first generation of American Impressionists that included Childe Hassam and John Twachtman. He and Twachtman traveled in Holland together and also held joint exhibitions including in 1888 at the Society of Painters in Pastel and the next year at the Fifth Avenue Art Galleries. Weir’s entries were still life, figure, and scenes from rural Connecticut, with obvious Barbizon School influence of Lepage and realistic tendencies of Gustave, but nothing that one could describe as Impressionism.

He was part of the founding of the Society of American Artists, which was a rebellion of European-trained American artists against the constraints of those upholding the standards of the National Academy. Weir was a leading figure in the Society and became increasingly influential in promoting leading-edge French paintings including the collection in America of work by his friend Bastien-Lepage and also of Gustave Courbet and Edouard Manet.

However, by 1893, exhibited paintings by Weir were being labelled Impressionistic in what was described by one critic as their “rude style of handling” (Gerdts 106) including their casual attention to detail and atmospheric qualities. Between 1893 and 1897, Weir completed factory landscape paintings that were said to reflect his full commitment to Impressionism. His summer home from 1883 was in Windham, Connecticut, and his factory paintings depicted the thread factories of nearby Willimantic, Connecticut. These realistic, industrial subjects were a departure from pervasive serene, often idealized American landscape painting.

Active in art circles, Weir was an organizer of the 1913 Armory Show in New York, which introduced avant-garde European art to the American public, and he was also President of the National Academy of Design from 1915 to 1917.

Five years after his death in 1919, a memorial exhibition of his work was held at the Metropolitan Museum in New York.