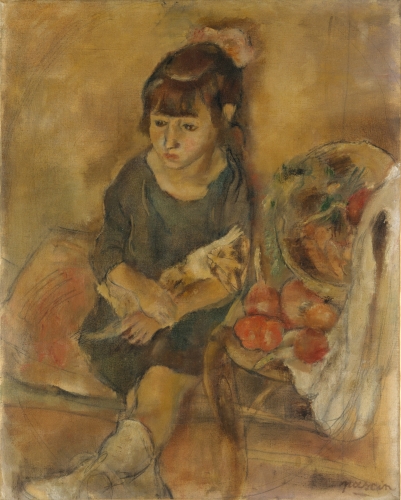 Born in Widdin, Bulgaria with the name of Julius Pincas, he was raised in Bucharest, Romania. He later adopted the name, Jules Pascin, under which all his paintings are known. He attended art schools in Vienna and Munich and traveled to Berlin and Paris. From 1905 to 1929, he worked as a satirical cartoonist for a Munich weekly. Later he changed his mediums from watercolor and drawing to oil.

From 1914 to 1920, he lived in America and became a U.S. citizen to escape military service in France. He traveled extensively in the southern states and portrayed downtrodden segments of society. In 1920, he returned to Paris, where he was a regular at the fashionable Cafe du Dome. He also traveled throughout Europe and North Africa. However, in 1927, he returned to New York City to re-establish his American citizenship. He stayed in Brooklyn Heights with Robert Laurent and Yasuo Kuniyoshi, and with “his trademark derby hat and outlandish drunken antics” (Pollock, 73) was very popular in a circle that included art dealer, Edith Halpert.

Suffering depression and alcoholism, two years later, he committed suicide on the eve of a prestigious solo show by slitting his wrists and hanging himself in his studio in Montmartre.

Sources include:
Peter Falk, Who Was Who in American Art
Lindsay Pollock, The Girl With the Gallery