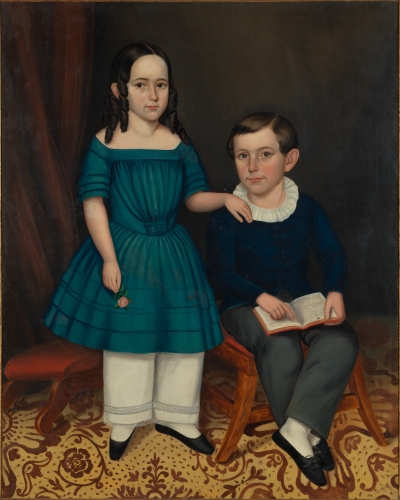 A folk-art portrait painter whose name remains prominent in American art, Joseph Stock was born in Springfield, Massachusetts and lived and worked there most of his life, painting more than 900 works during his brief career. He sometimes shared a studio with photographer O.H. Cooley and may have used some of his photographs in his portraits.

At age 11, he suffered a crippling accident and several years later was encouraged by a doctor to take up painting. He studied briefly with Francis White, a pupil of Chester Harding, but was mainly self-taught. He began his career by copying popular paintings of historical figures including Napolean, but then switched to portraits, many of them from corpses, which was a common method at that time. Often his subjects were children portrayed with domestic pets. His colors were considered raw, but he was exceptional because his figures had personality and expression.

He was also exceptional because he was much more experimental than most of his artist peers. He introduced bright colors into his work and did a variety of compositions including heads and full-body portraits.

Ill health plagued him during his life, and tuberculosis caused his death at age forty.