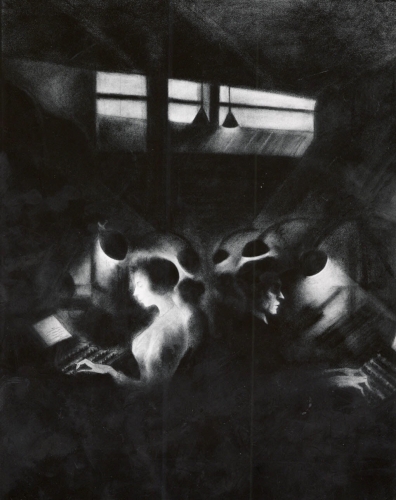 Stella was born June 13, 1877 at Muro Lucano, Italy, a mountain village not far from Naples. He became painter laureate of Muro Lucano when he was in his teens with a representation of the local saint in the village church. Stella immigrated to America in 1896 and studied medicine and pharmacology, but upon the advice of artist friend Carlo de Fornaro, who recognized his undeveloped talent, he enrolled at the Art Students League in 1897. Stella objected to the rule forbidding the painting of flowers, an indication of his lifelong devotion to flower painting. He also studied under William Merritt Chase in the New York School of Art and at Shinnecock Hills, Long Island in 1901-1902, displaying the bravura brushwork and dark Impressionist influence of Chase.

Stella liked to paint the raw street life of immigrant society, rendering this element more emotionally than the city realists, the Aschcan School headed by Robert Henri. Stella went through a progression of styles–from realism to abstraction–mixing media and painting simultaneously in different manners, reviving styles and subjects years later.

The “Survey” sent Stella to illustrate the mining disaster of 1907 in Monongah, West Virginia, and in 1908 commissioned him to execute drawings of the Pittsburgh industrial scene. Steel and electricity became a major experience in shaping his responses to the modern world, and Stella succeeded in portraying the pathos of the steelworkers and the Pittsburgh landscape.

Stella went abroad in 1909 at the age of thirty-two, lonely for his native land. He returned to Italy, traveling to Venice, Florence and Rome. He took up the glazing technique of the old Venetian masters to get warmth, transparency, and depth of color. One of Stella’s paintings was shown in the International Exhibition in Rome in 1910 and was acquired by the city of Rome.

The influence of the French Modernists awakened his dormant individuality. His friendship with Antonio Mancini, a Futurist, also played a role in his new style. At the urging of Walter Pach, Stella made a trip to Paris, where he met Gertrude and Leo Stein and saw the work of Matisse and the leading Fauves, spurring him to paint with alluring, vivid colors.

Stella effected a quick transition from traditionality to the abstract idiom. At the Galerie Bernheim-Jeune in 1912, he saw the works of his countrymen Carlo Carra, Umberto Boccioni and Gino Severini. Primed with these influences, Stella returned to New York in late 1912. His preference for structural composition is obvious in the paintings in which he fused high-key color with broad broken strokes, which were included in the 1913 Armory Show. A month following the Armory Show, Stella premiered at the Italian National Club to which the Italian ambassador made a special appearance to toast “an event in the history of the Italian colony here.” “Battle of Lights” (1914) was Stella’s first major Futurist work created as a result of the Armory Show,propelling Stella into the vanguard of Modernism. Color chips in various sizes with dense design and spears representing light beams allows the composition movement within a stable axis. This caused a sensation when displayed in a group show at the Montross Gallery in 1914.

Stella was represented in a group show at the Bourgeois Galleries in 1917 and 1918, and began a series of industrial paintings which grew out of the “Survey” commission, most notably the “Brooklyn Bridge” (1917-1918) in which he combined Cubist and Futurist techniques. This was exhibited in a one-man show at Bourgeois in 1920 and advanced his reputation substantially as the “poet” of the industrial scene. Stella had a show at the Whitney Studio Club in 1921. His most ambitious work “New York Interpreted” (1920-1922) inspired by Robert Delaunay’s “La Ville de Paris” was displayed at his solo show at the 1923 Société Anonyme of which he was a charter member.

At the same time, Stella was producing lyrical nocturnes and paintings heavy with symbolism bearing resemblance to the work of Odilon Redon. He also executed innumerable drawings of flowers as he wrote, “my devout wish, that my every working day might begin and end. . . with the light, gay painting of a flower.” Birds, tropical subjects, and fruits drawn with precision are themes which preoccupied him. His association with Dada artists at the Arensberg salon led Stella to paint on glass and collage. Until the end of Stella’s life, he collected scraps of cardboard and fashioned collages from them, portraying the old and battered over the new.

Stella spent a year in Naples in 1922 and made frequent trips to Europe and North Africa in the next eight years, living mostly in Paris where he met with critical success and exhibited at the Galerie de la Jeune Peinture. During the mid-1920s he tended to primitivize his work with symbolic nudes and worked in the traditional values of the Italian masters. He returned to New York in 1934 and was revitalized by a trip to Barbados in 1937, stopping in Paris and Italy. In 1938 Stella was back in New York painting flowers and still lifes until his death of heart failure on November 5, 1946.