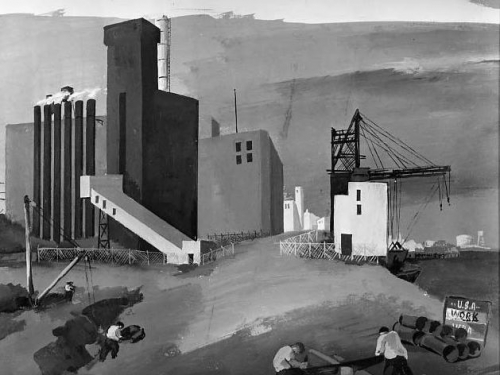 Born in 1900 in Minsk, Russia, he studied at the Educational Alliance Art School (founded in 1914), as well as the National Academy of Design, both in New York City.

He lived in Provincetown, Massachusetts and in New York City, curating several exhibitions for five Midwestern museums, the Philadelphia Art Alliance and the Cape Cod Art Association in Hyannis, Massachusetts.
Kaplan was a member of several art organizations, including the Artists League of America, Audubon Artists, and the Provincetown Art Association, where he served as honorary vice-president and trustee from 1955 on.

He won numerous awards, including at the National Academy of Design, the Cape Cod Art Association, and the Audubon Artists.

His work is in the permanent collections of the Metropolitan Museum of Art, the Butler Institute of American Art, the Newark Museum, the University of Kentucky, and others.

Source:Falk, Peter Hastings (Editor), Who Was Who in American Art