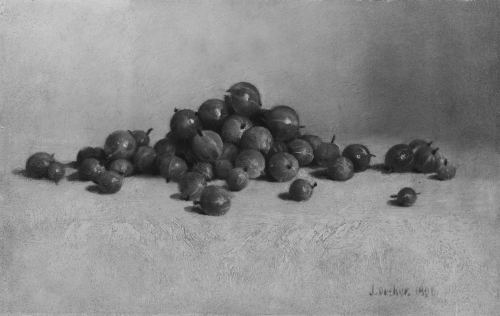 A creator of still life in the 1880s and 1890s, Joseph Decker painted in both hard-edged and soft styles that conveyed sentimentality and included subjects that ranged from fruit still lifes to his pet squirrel. He was first known for his harsh paintings that were full of vibrating color, but his later works were more misty, soft, and conventional.

He was born the son of a carpenter in Wurttemburg, Germany. In 1867, he traveled to the United States where he first took up residency in Reading, Pennsylvania. He soon settled permanently in Brooklyn.

He studied art at night at the National Academy of Design, and in 1877 began showing paintings at the annual Brooklyn Art Association show. During the day he was an apprentice to a house painter and also worked as a sign painter.

In 1879, Decker returned to Germany where he studied at the Munich Academy, studying under history painter Wilhelm Lingerschmidt. There he was introduced to the fluid, dark-toned, bravura style that represented the school. When he returned to the United States a year later, he proceeded to paint still lifes with the same bold, full of vibrate colors as he did before he left.

Decker early works, mostly still life and some genre, have an unsettling detachment of viewpoint, as a close focus and a dramatically cropped composition that was similar to the twentieth-century photography of Alfred Stieglitz and others. The flatness of the picture plan and the boldness of Decker’s colors repelled the art critics of his time but appealed to a modern eye.

Decker’s later work was much influenced by impressionism: his landscapes followed the style of George Inness, and his still lifes adopted a balanced, classical composition.

Although he had a wife and five children, Decker often traveled to Germany for long periods and was reported to have been an inattentive husband and father. By all accounts he was fond of animals, however, and included his pet squirrel in several of his paintings. Decker died in the charity ward of a Brooklyn hospital April 1st, 1924.