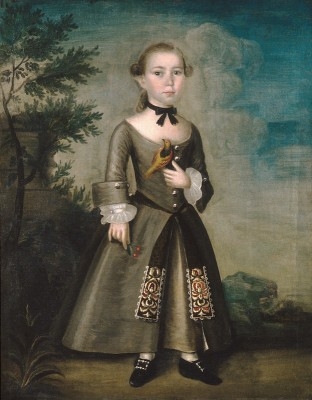 Born in Charlestown, Massachusetts, Joseph Badger was one of that state’s earliest native-born artists who became a portrait painter. He first worked as a house painter and glazier and had no formal art training.

In 1731, he moved to Boston, and in 1740 began portraiture as a sideline which he learned by copying black and white mezzotint reproductions of the work of English painters. His portraits are three-quarter inch and usually have landscape backgrounds. He had extensive patronage, which was surprising because he was the least sophisticated of the portrait painters of his era.

His pictures seem flat, tediously executed and without personality, and many of his wealthy subjects are in austere, puritanical dress. Seventy-five portraits have been identified, and the most attractive seem to be those of children including his grandson.