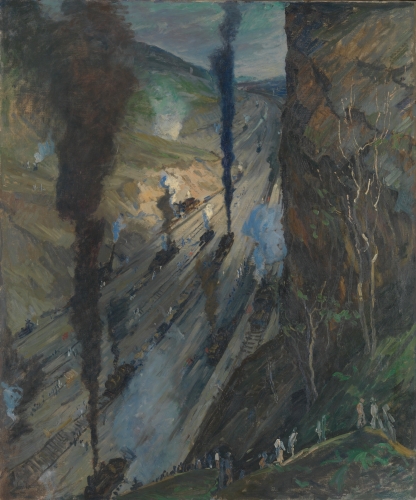 Jonas Lie was a Norwegian-born American painter. He is best known for colorful paintings of coastlines of New England and city scenes of New York City.

Jonas Lie was born in Moss, in Østfold county, Norway. His father Sverre Lie, was a civil Norwegian engineer and his mother Helen Augusta Steele, was an American from Hartford, Connecticut. His father was a brother of Thomasine Lie who had married their cousin Jonas Lie, the famous Norwegian author, whom the painter was named after. Their home was a meeting place for famous people such as Henrik Ibsen, Bjørnstjerne Bjørnson, Edvard Grieg, and Georg Brandes. In 1892 his father died and 12-year-old Jonas was sent to stay with his aunt and uncle, Thomasine and Jonas Lie, in Paris. Having already received drawing instruction from Christian Skredsvig in Norway, he now attended a small private art school. The following year, he joined his mother and sisters in New York City.[4]

Between 1901 and the memorial exhibition in 1940 his work was shown all over America. In 1905 Lie exhibited 34 pictures in the Pratt Institute, Brooklyn Museum of Art. Between 1905 and 1938 Lie had 57 one-man shows, each including from 12 to 45 paintings. He participated in important annual and biennial exhibitions at the National Academy of Design, the Pennsylvania Academy of the Fine Arts, the Art Institute of Chicago, and the Corcoran Gallery of Art in Washington as well as most of the world fairs. While living in Panama in 1913, he painted scenes of the construction of Panama Canal which were later donated to U.S. Military Academy at West Point in memory of the West Pointer who, as chief engineer, was most potent in channeling the isthmus, General George W. Goethals. In 1932, Jonas Lie was awarded the Knight of Order of St. Olav by the King of Norway.[5][6]

Jonas Lie often depicted the sea, channels, and ships with dramatic perspective and powerful use of color. He became known for colorful impressionistic scenes of harbors & coves, painted during the many summers he spent on the coasts of New England & Canada. Throughout his prolific career he painted brilliantly colored images of the rocky coves and harbors that identify the region’s dramatic shoreline. Lie painted a landscape mural in honor of his wife, Sonia, in the sanctuary of the First Unitarian Society of Plainfield, New Jersey in 1929. It is inscribed, “I will lift up mine eyes unto the hills.” Lie was a member of various art organizations including the Salmagundi Club and was active in the National Academy of Design. Paintings of Jonas Lie are on exhibit at art museums throughout the United States including at Utah Museum of Fine Arts; Cornell Fine Arts Museum; Phoenix Art Museum; San Diego Museum of Art; Corcoran Gallery of Art; Museum of Fine Arts, Boston; Brooklyn Museum of Art; Metropolitan Museum of Art; High Museum of Art; the Detroit Institute of Arts and at the Memorial Art Gallery.[7]

Biography from the Archives of Wikipedia