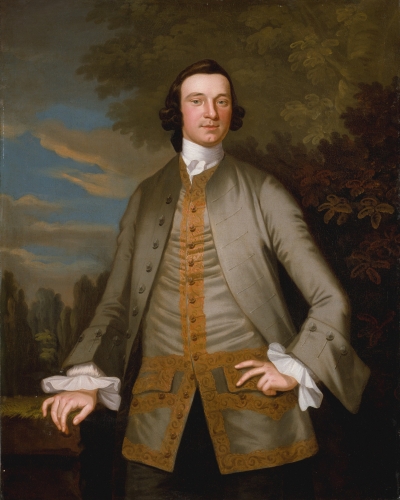 A painter of nearly 300 portraits, John Wollaston is regarded as a major influence on Colonial painters John Hesselius, Benjamin West and Matthew Pratt. He painted large canvases, usually three-quarter length figure, that flattered his subjects in classical style with richly rendered clothing. He is credited with leaving an extensive record, through his portraits, of practically every leading aristocrat of colonial America including Martha Washington.

His birthplace is unknown, but it is thought that his father, also John Wollaston, was either a portrait painter a painter of drapery, meaning clothing and backdrops for portrait painters.

In 1733, he was living in London, and some of his paintings from that period are in the Bodleian Library at Oxford. In the early 1740s, he came to America living from 1749 until 1752 in New York City where he was one of that city’s first significant painters. He also worked in Maryland, Virginia, South Carolina, and left for England via the West Indies in the spring of 1767.

Little more is known about him after that except that by 1775, he was back in England.