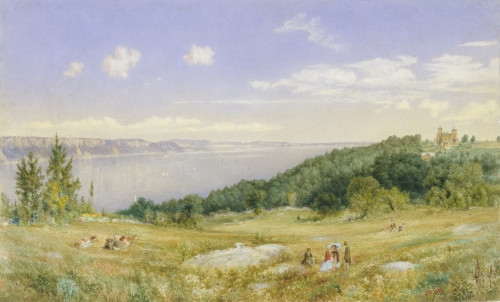 Born in London, England, John William Hill came to America with his family at age 7. His father, John Hill, was a well-known landscape painter, engraver, and aquatintist. John William had a career of two phases, a city topographer-engraver and then, the leading pre-Rafaelite school painter in this country. Employed by the New York Geological Survey and then by Smith Brothers in New York City, he did lithographs of cities, private residences and public buildings.

In 1855 at age 43, he became involved with the Pre-Rafaelite movement led by Englishman, John Ruskin. This aesthetic philosophy was a turning away from academic strictures to the purity of art before Rafael–focus on the uplifting qualities of art through natural setting landscapes, meticulous observation of nature, and bright colors on a wet ground. The bright, luminous qualities with detailed form contrasted with the sombre prevailing works of the time.

Hill worked mainly in New Jersey and along the Hudson River Valley but also was in the White Mountains of New Hampshire in 1852 and 1857 and in 1852 did a view of Richmond, Virginia that was published by Smith and Brothers.