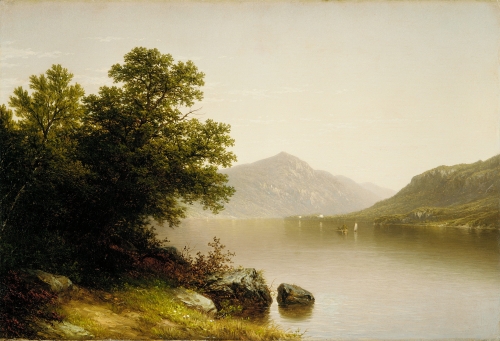 Born in New York City, John Casilear was a leading Hudson River School painter, known for serene landscapes that reflect delicate detailing he learned as an engraver and his interest in Luminism or the reflection of light on natural forms.

He began his study with master engraver Peter Maverick and then studied landscape painting with Asher Durand. To earn money, Casilear worked for many years as an engraver for the American Bank Note Company and later with his own firm.

But his great love was landscape painting, which he exhibited beginning 1833 at the National Academy of Design. From 1840 to 1843, he traveled in Europe with Durand, John Kensett and Thomas Rossiter, but for most of his life, he worked either out of his studio in New York City or in upstate New York or in Vermont, where he spent many summers.

From 1854, he devoted himself to landscape painting and was a leader among the Hudson River School Luminist painters who focused on special effects of air, light, and mood. Views of Lake George were his most frequent subjects.

He was elected an Academician of the National Academy in 1851, and his work is at the Metropolitan Museum of Art in New York and the Corcoran Gallery of Art in Washington D.C.

He died in Saratoga, New York.

Source:
Michael David Zellman, 300 Years of American Art
Peter Falk, Who Was Who in American Art