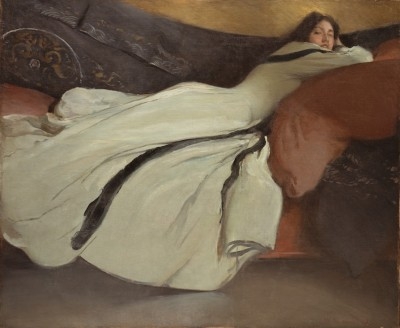 Born in Allegheny, Pennsylvania, where he had first-hand knowledge of the tough life of steel workers, John White Alexander became one of the most prominent, fashionable artists in New York City during the late 19th and early 20th centuries. He did portrait, figure, and mural work and is especially noted for female subjects, which he rendered with fluid, sweeping lines and “an almost abstract, decorative rhythm of shape with a graceful and voluptuous expressiveness” (Baigell “Dictionary” 8).

As a young man, he worked as a telegraph messenger boy but soon was discovered as a talented illustrator. He began his career working in the Art Department of “Harper’s Weekly” as a political cartoonist and illustrator. The 1877 Pittsburgh strike was a special focus. As a part of his assignments he did field work in New Orleans in 1881, and in 1883 was sent to Yellowstone to capture the beauty of the geysers with ink drawings which were then converted to wood engravings. He worked en plein aire to make the originals.

He traveled in Europe with Frank Duveneck and William Merritt Chase, attended the Royal Academy in Munich, and in Venice became acquainted with the Tonalist style of painting through James McNeill Whistler.

In 1887, he married Elizabeth Alexander, a writer of short stories for whom he had illustrated, and from 1890 for ten years, they lived in Paris where he became a leading proponent of the Art Nouveau movement. In Paris, he did some of his most powerful and imaginative work, including a number of portraits and elongated female figures in dimly lit backgrounds. Among his circle of friends were Oscar Wilde, Henry James, James Whistler, Auguste Rodin and Andre Gide. In 1894, he was voted a member of the Societe National des Beaux Arts and in 1901 was made Knight of the Legion of Honor by the French government.

For “Harpers” and “Century Magazine,” he created his portraits of European dignitaries, and in 1901, he and his wife settled in New York where he became a portrait painter of scores of prominent people. He was immediately elected to membership of the National Academy of Design and served as President from 1909 to 1915. He also did mural commissions including one for the Carnegie Institute, Pittsburgh, which to that time was the largest mural ever painted by an American. He also received a commission to execute a series of murals, “The Evolution of the Book,” for lunettes in the Library of Congress.

In 1890, Alexander and his wife briefly visited the Cornish, New Hampshire Art Colony, where he painted landscapes.