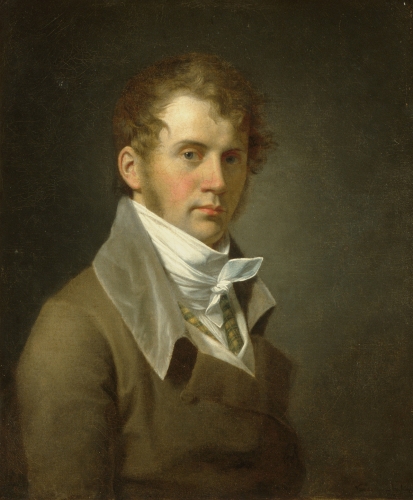 Born and raised in Kingston, New York, John Vanderlyn had the desire to be a great history painter but did portraits and landscapes including panoramas to earn a living. He became the first American painter to study in Paris, where he had training in Neo-Classicism as espoused by Jacques-Louis David and Jean-Auguste Ingres. It was a style of “strong line, especially in the molding of figures, somber coloration, and an adherence to antique and mythological subjects or poses.” (Zellman 81)

Vanderlyn had artistic heritage from his grandfather, Pieter Vanderlyn, an early portrait painter in Manhattan.

Before he went abroad, he studied drawing and history painting in New York City at the Columbian Academy with Archibald and Alexander Robertson, English brothers who operated the school whose students were primarily children of wealthy New Yorkers. There Vanderlyn, from modest circumstances and supported in the school by a local merchant, was thrown into a world much different from his own background. Vanderlyn also worked for an art dealer and copied portraits by Gilbert Stuart including one of Aaron Burr, then United States Senator from New York. Seeing the copy, Burr was so impressed he arranged for Vanderlyn to go to Philadelphia to study with Stuart, and then from 1796 to 1801, subsidized him for a five-year stay in Paris where he studied at the Ecole des Beaux Arts with Francois Andre Vincent. This sponsorship of Vanderlyn to Paris had a lasting effect on American art because it changed the pattern of Americans studying in England to Americans studying art in Paris.

At first, Vanderlyn was uneasy in Paris because of the ease in morals compared to that which was espoused in America. In classes, he was exposed to naked models, which was part of the background for historical painting. Francois Andre Vincent was his landscape teacher.

During that time, Vanderlyn returned to America briefly in 1802 because he was low on money. He was besieged with portrait commissions, but took only enough of them to maintain some income. He expressed a desire to paint Niagara Falls, and Burr, then Vice President of the United States, wrote a letter of introduction to a friend who lived near the Falls so that Vanderlyn would have a host in that wilderness country. His intention was to have the paintings engraved in Europe, but there was little interest there because sophisticated Europeans did not express interest in American landscape.

In 1802, shortly after his trip to Niagara, Vanderlyn returned to Europe with funds provided by the newly formed American Academy of Art. From that point, he became very “Frenchified” (Flexner 144), and when he traveled to England expressed boredom with the Romanticism that was so popular there among artists.

His painting “Marius Amid the Ruins of Carthage” was highly celebrated in Paris and won a gold medal from Napolean and established his reputation in Europe. In 1812, he painted “Ariadne”, which was the first recognized nude painted by an American. It was based on the Renaissance painting “Ariadne Asleep on the Island of Naxos”. In Europe it was accepted, but in America it brought him scandalous disapproval.

He worked to establish a career in his native country but failed. The plan to feature his panoramic Versailles paintings in New York’s Central Park failed financially, and the city canceled his lease of the space. Also, his friendship with Aaron Burr worked against his getting commissions, although in 1837, he completed The Landing of Columbus for the rotunda of the U.S. Capitol Building. (Burr had killed Federalist statesman Alexander Hamilton in a duel and had been accused but then was acquitted of treason but remained out of favor).

For the remaining thirty-seven years of his life, Vanderlyn was impoverished. In 1852, he died in his hometown of Kingston, a very embittered old man.