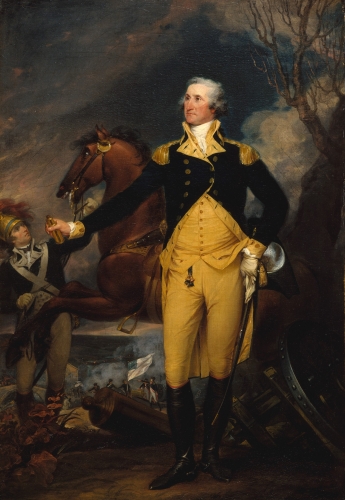 George Washington before the Battle of Trenton

Born in Lebanon, Connecticut, John Trumbull is one of America’s best-known Colonial portrait and history painters. He is especially noted as the person who documented in his paintings the founding fathers of America and the history of the American Revolution. One of his most famous paintings is titled Declaration of Independence, and having fought in the Revolution, Trumbull was extremely proud and asked to be called Colonel Trumbull in recognition of that service.

He, along with Asher Durand and William Dunlap, is also credited as one of the artists who ‘discovered’ and promoted the landscape painting of Thomas Cole, whose work spoke to Trumbull’s convictions that American artists should explore new subjects and methods and chart new directions. In his later years, Trumbull expressed frustration that he had given into what the public wanted from him, which made him more conservatively artistically than he had earlier intended with his career. He also believed that other talented painters such as John Copley and Gilbert Stuart had ‘lost their artistic way’ and held to ‘safe” painting subjects and styles and spent more time working in Europe than America.

Trumbull was the son of the Governor of Connecticut and grew up in privileged circumstances, showing an early talent for art. He graduated from Harvard University in 1773 at age 17, the youngest person in his class. He served 18 months in the Continental Army, and in 1777 began painting portraits in Boston. His teacher and good supporter was John Singleton Copley, whose open, realistic style Trumbull adopted.

In 1780, he went to London and studied with Benjamin West, expatriate American painter. Several months later he was jailed, being used by the British to retaliate for a crime in American against one of their citizens, Major John Andre, but Trumbull was allowed to continue painting in jail. In 1785, he was in New York City, and from 1789, he lived back and forth between America and England until 1816 when he settled in New York.

A childhood accident had blinded Trumbull in one eye, which affected his spatial management of large canvases, but he was credited with being a master of paintings done on a smaller scale. His painting, Declaration of Independence, was only 30 inches in width, but it had depictions of the 48 signers of the Declaration. Trumbull also did miniature portraits of these historical figures.

He served as President of the revived American Academy of Fine Arts and did murals for the Capitol, commissioned in 1817. The National Academy of Design was founded by artists who rebelled against Trumbull in his position at the American Academy because he was perceived as undemocratic and snubbing of artists who did not have “gentlemen” credentials. His personality caused such a deep division that a group led by Samuel Morse founded the rival National Academy of Design.

Trumbull lived to age 88 and died in 1843 in New York City. He and his artist wife, Sarah Hope Harvey, are buried beneath the current Yale University Art Gallery, which houses the collection of the artist.