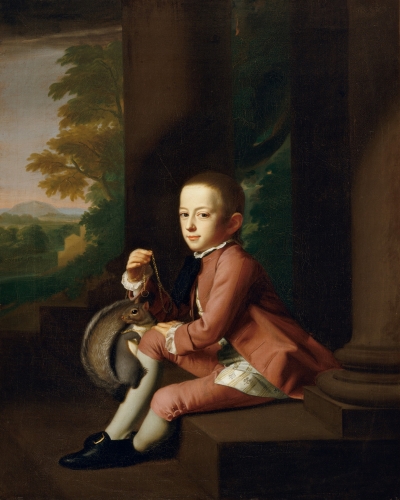 Born in Boston, John Singleton Copley became one of America’s most famous portrait painters, spending his early career in Boston and then settling in England where he also took up history painting. At an early age, he was Boston’s most esteemed portraitist, much sought after by prominent persons such as Paul Revere and Samuel Adams. As a dedicated realist, he gave foundation and form to the American tradition of realism. He was also exceedingly interested in history painting and was disappointed at the lack of enthusiasm Americans seemed to have for this subject that was so popular in Europe.

His technique was to pay great attention to actual detail, giving facts about the subject’s life such as showing Paul Revere with a piece of the silver that signified his profession. Copley did not like flashy color or dramatic, symbolic effect and used props only to enhance characterization.

His father died shortly after he was born, and his mother, who ran a tobacco shop at Long Wharf on Boston Harbor, married portrait painter and engraver, Peter Pelham, who gave Copley his early training. As a teenager, he was influenced by American portraitist Robert Feke and Joseph Blackburn, an English immigrant painter, to dispense with the hard-edged, provincial limner style for a more advanced technique of illusionism.

In spite of his early success, he desired more professional training and went to Europe to study the great masters. He had been urged to come to London by Sir Joshua Reynolds, head of the Royal Academy, and Benjamin West, renowned expatriate American painter at the Royal Court. The fact that his Colonial family was Loyalist to the British crown also played heavily in this decision.

In London, Copley studied with John Smibert and became a popular figure in English society, eventually admitted to the Royal Academy. In this environment, his painting style also took on more sophistication of composition and a softer, more elegant manner. Some critics favor the directness and independence of his Colonial work over the English paintings. In London, he, having been a friend of West, became his competitor and grew to resent him for getting what he felt was inflated attention. He believed his own history painting superior to West.

In London, he developed an ingenious way of earning money, one that riled his fellow-members of the Royal Academy who primarily used that venue to sell their paintings. But Copley had private showings and charged admission; he sold engravings of the paintings and then sold the painting itself.