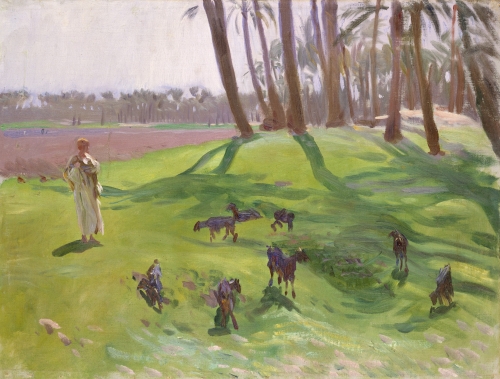 Gifted with both technical dexterity and a brilliant sense of mood, color, and light, John Singer Sargent achieved fame and fortune in Europe and the United States as the preeminent society portraitist of the Gilded Age. In addition to his commissioned portraits, he completed several high-profile mural projects in the Boston area and deftly captured the landscapes and architecture of Europe in hundreds of impressionistic plein-air watercolors.

Sargent was born in Florence in 1856 to American expatriate parents. Both of Sargent’s parents came from well-connected, wealthy families in New England and Philadelphia. At the behest of his wife, Mary, FitzWilliam Sargent abandoned his career as a surgeon to travel continually from one European city to the next. Sargent, their eldest surviving child, grew up amid the finest art and culture Europe had to offer, and he displayed a precocious talent for drawing. As a teenager in Rome, he studied with German-American painter Carl Welsch. He later enrolled in the Accademia di Belle Arti in Florence. The Sargent family supported his decision to become an artist by moving to Paris in 1874 so that he could pursue further training.

In Paris, Sargent was quickly accepted into the studio of Charles-Emile-Auguste Durand, (known as Carolus-Duran), a master of portraiture who was known among French academic painters for his fluid brushwork and unorthodox practice of painting tonal masses and planes directly on canvas instead of painting from preparatory sketches. Although Carolus-Duran’s aesthetic and practices strongly shaped Sargent’s style, the young artist was also eager to sharpen his natural talent for draftsmanship. In October 1874 he gained acceptance to the Ecole des Beaux-Arts to study drawing; at the same time, he continued his training with Carolus-Duran.

Sargent traveled to the United States for the first time in 1876—the trip allowed him to claim his American citizenship. In the late 1870s and early 1880s, as he began to establish himself as a Paris-based portraitist, Sargent traveled to Brittany, Venice, and other locales where he painted scenes of street and folk life. One of these paintings, “Oyster Gathers of Cancale” (Corcoran Gallery of Art, Washington, D. C.) launched his public career when it won honorable mention at the 1878 Salon in Paris. The award was the first of many prizes and honors.

Among Sargent’s early commissions were “The Daughters of Edward Darley Boit” (1882; Museum of Fine Arts, Boston) and full-length portrait of society beauty Madame Pierre Gautreau titled “Madame X” (1884; Metropolitan Museum of Art, New York). The frank sensuality of “Madame X” stirred up so much controversy that Sargent left Paris for London, thereafter his permanent home base.

In London, Sargent became the leading portrait painter among upper class families—both British and American. Elegant and flattering, Sargent’s portraits also excelled at captured complex nuances of the sitters’ personalities. A painting trip to Boston and New York from 1887 to 1888 led to a major mural commission for the Boston Public Library, followed by other mural commissions for the Boston Museum of Fine Art and Harvard University’s Widener Library. As a mark of his trans-Atlantic success, Sargent attained academician status in the both the Royal Academy of Arts in London and the National Academy of Design in New York in 1897.

At the same time that he was making his name with commissioned portraiture, Sargent developed ties to Impressionist painters and a strong interest in plein-air painting. Beginning in 1885, the artist made regular trips to Giverny and formed a friendship of mutual admiration with Claude Monet. The twilit garden scene “Carnation, Lily, Lily, Rose” (1886; Tate Gallery, London) exemplifies Sargent’s work in an Impressionist vein. By 1906, Sargent had grown tired of dealing with the demands of his moneyed patrons and he shifted his focus to landscapes and genre subjects of his own choosing. Sargent traveled frequently, and masterful watercolors of his destinations in France, Italy, and Switzerland dominated his later work.

Sargent died in London in 1925, on the eve of an American trip. His work is represented in major public collections in the United States, England, and beyond, including the Brooklyn Museum of Art; Fogg Art Museum of Harvard University; Isabella Stewart Gardner Museum, Boston; National Gallery of Art, Washington, D.C.; Los Angeles County Museum of Art; and London’s Tate Gallery and Royal Portrait Gallery.