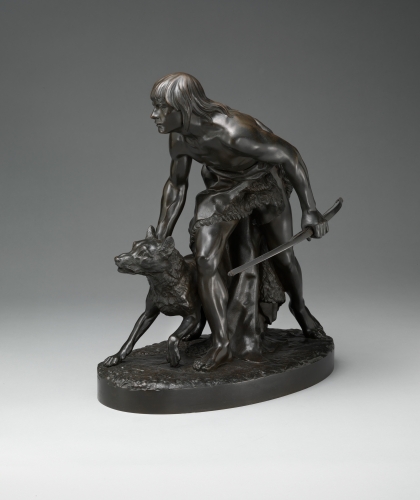 One of the most prominent American sculptors of the late 19th century, John Quincy Ward made his reputation as the leader of a group of post-Civil War naturalistic sculptors dedicated to American themes that rebelled against the prevalent neo-classical aesthetic of graceful, submissive-seeming figures. Ward created sculpture in a vigorous, masculine style that spoke of strength and dominance rather than grace and submission.

Characteristic of his simple, direct style is The Indian Hunter, which his wife had replicated for his grave site in Urbana, Ohio. The piece had been one of his first major independent works and was unique because it was meant to be viewed in the round rather than frontally.

The major influence on Ward’s sculpture and his attitudes about creativity was Henry Kirke Brown, an exponent of naturalism of style and American subjects. Ward became Brown’s studio assistant and worked with him in New York on the Union Square statue of George Washington.

Ward’s family had deep roots in America. He was descended from colonial Virginia ancestors, whose children then moved on to Kentucky and Ohio, where Ward was born on a farm near Urbana, a town founded by his grandfather. He lived a relatively free childhood in that he attended school sporatically and spent much time roaming the countryside. One day he discovered potter’s clay, and he modeled the head of a Black man who lived nearby. The neighbors gave it much praise, and this reinforcement inspired Ward who began studying with a local potter whose last name was Chatfield.

His father wanted him to become either a farmer or doctor, but Ward determined to become a sculptor and was encouraged by a sister who lived in New York City. At age 19, he visited her, and she introduced him to Henry Kirke Brown, who became the young man’s tudor and aesthetic master for seven years. Adopting Brown’s theories of focusing on American subjects, Ward deliberately did not go to Europe to study, and was the first American sculptor of note to eschew studying abroad.

Ward lived and worked in New York, and most of his sculpting was public monuments for that city, although he also did portrait busts of many prominent persons. One of his greatest achievements was Henry Ward Beecher in Borough Hall Square in Brooklyn. In 1860, he cast his most famous work, The Indian Hunter, which was purchased by a group of wealthy New Yorkers and placed in Central Park. This sculpture, emphasizing the animal powers of the Indian figure as well as his accompanying dog, was exhibited by Ward at the Pennsylvania Academy and the Washington Art Association. “Concerns about nudity were solved by a massive and weighty, if not particularly realistic, fur wrapped around the hunter’s waist and trailing around his legs.” (Katz 9)

The sculpture was very well received in New York City and was key to Ward’s election as an Associate to the National Academy of Design in 1863. In 1874, he was elected President of that organization. He was also one of the organizers of the National Sculpture Society, which from 1893 to 1905, he served as first president.

In 1876, he gave a commission for a monument to Admiral Farragut to Augustus Saint-Gaudens, which in retrospect, was the passing of the baton from John Quincy Adams Ward to a new generation of sculptors. This succeeding group would build on Ward’s realism and apply it to depictions of nude women, clothed white men and Indian and African-American figures.