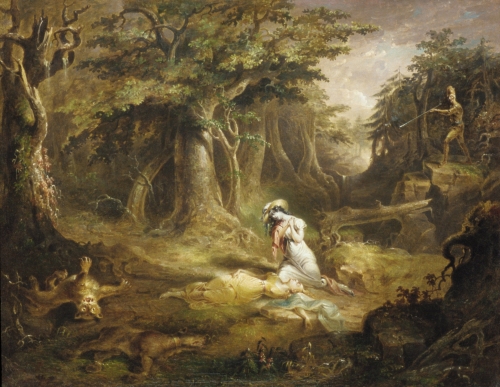 John Quidor was from a French-Swiss background; his grandfather Pierre Quidor was a Revolutionary War patriot.

John Quidor was born in 1801 in Tappan, New York and when he was nine, the family moved to New York City. He became apprenticed to a portrait painter, John W. Jarvis, and was inspired to a degree by his fellow pupil Henry Inman. Quidor exhibited Ichabod Crane Pursued by the Headless Horseman at the National Academy of Design in 1828. The painting, now in the Yale University Art Gallery, indicates the direction Quidor would pursue exclusively, which was the genre of American literature especially for novels by Washington Irving.

Quidor’s paintings apparently did not sell, and he made his living from painting banners and fire engine panels. The portrait painter Charles Loring Elliott admired the ‘Ichabod Crane’ and went to Quidor for instruction. In 1833, Quidor exhibited Leatherstocking Meets the Law, again at the NAD.

Following the destruction of his studio by fire in 1835, Quidor relocated to Columbus, Illinois. He tried farming but was not successful, and he continued sending paintings to New York exhibitions. A minister named Smith commissioned Quidor to execute religious works that were to be shown on tour. Three paintings were completed by 1847 in a new studio in New York, and the other four, two years later. Around 1850, Quidor was back in New York permanently but at the age of sixty-six, Quidor stopped painting and moved to Jersey City, New Jersey.

John Quidor interpreted Washington Irving’s stories freely. His landscape settings are indebted to the British picturesque tradition: gnarling, blasted and uprooted trees with “gesticulating” branches, spiky, overgrown weeds and shrubbery in the foreground areas, and frequent moonlight effects predominate. The Money Diggers (1832; The Brooklyn Museum) is a masterpiece of American Romantic painting. Based on Irving’s Tales of a Traveller, the scene features a dark, moonlit forest clearing with a cavern-like hole where Wolfert, a Dutch farmer, discovers a treasure chest. At the sudden appearance of an apparently drowned pirate in the upper right-hand corner, Wolfert expresses astonishment in a Baroque, theatrical pose, while the knock-kneed Dr. Knipperhauser is pure caricature.

An equally famous Quidor image is The Return of Rip Van Winkle (c.1849; National Gallery of Art). It is a figure composition in which the disoriented Van Winkle comes back to town after his long sleep, only to confront a jeering mob. Some have suggested that Quidor identified himself with Rip Van Winkle, an alienated member of society. The painting’s rich golden-brown tonalities remind one of Dutch genre painting. His Voyage to Hell Gate from Communipaw (ca. 1855; Wichita Art Museum) has been cited as a visual source for Albert Pinkham Ryder.