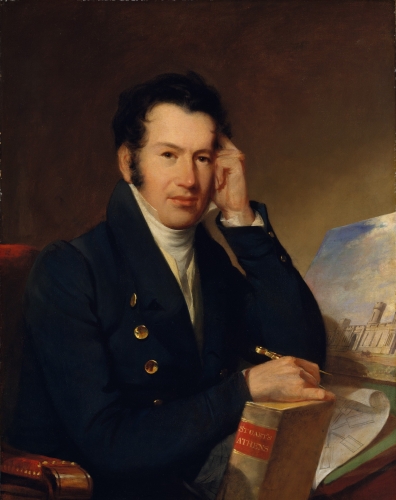 Born in Boston while his parents were visiting there, John Neagle spent most of his life in Philadelphia where he studied with Peitro Ancora, Thomas Wilson, a coach painter, and Bass Otis, a portraitist and lithographer. Otis introduced him to Thomas Sully, the leading portraitist in Philadelphia, and Neagle eventually married Sully’s stepdaughter.

Sully’s vivid coloring influenced Neagle’s strong, skillful use of color. In 1818, he traveled through Kentucky to New Orleans before setting up a studio in Philadelphia. In 1825, he traveled to Boston to get advice from Gilbert Stuart, and Stuart allowed him to paint his portrait, regarded as one of the best portrait’s of Stuart in existence. Stuart’s smooth brushwork is reflected in Neagle’s portraits. In Philadelphia, he had a successful career as a portraitist of prominent Philadelphians. Many of his subjects were fellow artists and architects.