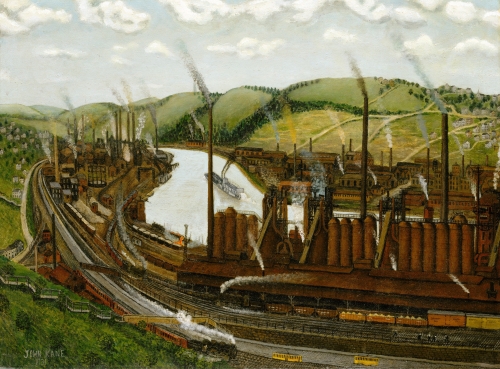 One of the first folk artists in America to gain national reputation, John Kane painted in a style popularized by the French painter, Henri Rousseau (1844-1910). Kane’s work is of everyday subject matter and lacks three-dimensional perspective, anatomical realism, and subtleties of tone or atmosphere. But it is simple and fresh in the naive folk tradition.

He did not begin painting until age sixty seven, when he submitted his paintings to the 1927 juried Carnegie International exhibition and received a special Purchase Award. A year later, he became a member of the Associated Artists of Pittsburgh.

From that time, he had his work widely exhibited including at the Harvard Society of Contemporary Art in 1929, The Toledo Museum of Art from 1939 to 1934, The Pennsylvania Academy of the Fine Arts, the Museum of Modern Art, and in the Whitney Museum’s first and second Biennials.

He was born in West Calder, Scotland in 1870 and came to the United States at age nineteen. For many years he was a common laborer in West Pennsylvania coal mines and was a “gandy-dancer” for the Baltimore and Ohio railroad, meaning he tapped down the rocks between ties and made sure the tracks were clear. He also worked for Westinghouse Electric and for Bessmer blast furnaces in Pittsburgh.

Much of his painting reflects these experiences as well as his time as an amateur boxer and restlessly wandering across Kentucky, Tennessee and Alabama.

When he got a job painting the exterior of railroad cars, he was inspired to become a painter. He also worked at other related crafts including house painting and retouching of photographs. In 1928, his painting career received a major boost when Pittsburgh’s Carnegie Institute bought one of his paintings.