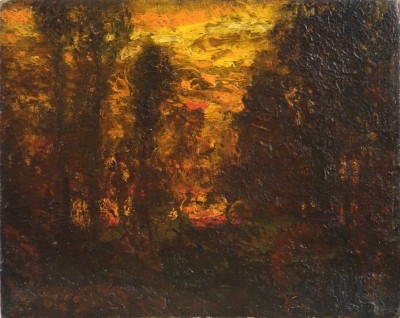 One of New England’s prominent landscape artists of the late nineteenth century, John Joseph Enneking painted in a variety of styles including Hudson River School, Tonalism and Impressionism. Although he cannot be easily slotted into any one of those categories, he was best known for Tonalist forest scenes at twilight. Enneking had a strong, love and respect for the landscape, and his conservationist views led to his election as a Park Commissioner in Boston.

Enneking, with his wife and two daughters, made his first trip to Europe in 1872 and stayed four years, which give him an opportunity to observe the influences of both academic art and new styles, especially Tonalism and the budding Impressionism. These experiences meant he was exposed to European styles before his peer artists who composed The Boston School including Frank Benson and Edmund Tarbell. Enneking associated with Tonalist Camille Corot, Barbizon School painter Jean Millet, and Impressionists Claude Monet and Camille Pissarro. The subdued palette of the Barbizon painters, dominated by shades of brown and green, deeply influenced his painting as did the plein-air painting technique of them and the Impressionists.

Enneking was born on an Ohio farm near Minster and was raised on his parent’s farm where he, loving the landscape, took long walks with his mother. However, his parents died when he was sixteen, so he moved in with an aunt and uncle in Cincinnati. There he had his first exposure to art and determined to become an artist. He took his first classes in the city at St. Mary’s College.

During the Civil War, he served in the Union Army and badly injured, returned to Cincinnati where he took a long time to recover. He then set off for New York to start his art career, but learned that Boston was the place considered the center of culture in America.

In 1868, he moved to Boston where he studied lithography and painting with Samuel Gerry. Shortly after settling in Boston, Enneking met Frederick Porter Vinton, considered an important Boston painter, and from him, got a letter of introduction to Leon Bonnat, one of the more famous painters and teachers in France. This boost combined with Enneking’s general interest in furthering his education, led to the four-year trip to Europe that so strongly impacted hs career. He studied landscape painting at the Munich Academy in Germany and figure painting in Paris where his teacher for three years was Leon Bonnat. He also worked with the French Barbizon-School landscape painters, Charles Daubigny and Louis Boudin.

In 1876, he returned to the Boston area and settled with his family near the city at Hyde Park where he had a studio with large windows and wide vistas. Two years later, he had his first solo exhibition, which “sealed his reputation.” (Falk, 1050). In addition to fine art painting, Enneking became an active illustrator whose clients included Scribner’s, Harpers and other magazines. He also gave private art lessons, “cheerfully available to young people interested in painting.” (Hunter, 96).

He spent much time painting in the New England countryside, and in the early 1880s, bought a place in North Newry, Maine near New Hampshire where he painted in the White Mountains. In the spring and fall, he frequently traveled south including to Duxbury and Cape Cod.

Enneking’s paintings were honored throughout his lifetime. In 1915, a testimonial dinner was held for him at the Copley Plaza in Boston with over one-thousand persons attending. He was crowned by Cyrus Dallin with a laurel wreath, signifying victory and high accomplishment.