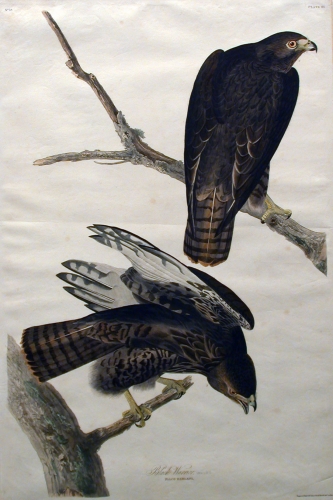 One of America’s first wildlife artists, John Audubon has a name synonymous with conservation, but his realization about protecting the environment came late in his lifetime. He was an avid hunter, who killed the specimens depicted in his publications, but his in-depth studies have left a strong awareness of the beauties and complexities of nature.

Audubon was born in Santa Domingo, now Haiti, of a French Chambermaid mother, Jeanne Rabin, and French father, Jean Audubon, who was a successful naval officer, merchant, planter, and slave dealer. They traveled on the same ship to Haiti in October, 1783.

In France, where he was taken at age 4, the young Audubon was educated among the upper classes. By age 15, he was drawing French birds, and by age 17, he was studying drawing in Paris. It has been written that he studied in Paris with Jacques-Louis David, a story that Audubon allowed to continue, but no credible evidence supports this assertion.

From 1803, while he was in Pennsylvania managing his father’s estate, and developing a love for the outdoors, he began his ventures into ornithology. In 1820, he made his goal the publication of an anthology of bird drawings, and financing his way with portraiture, he traveled the Ohio and Mississippi Rivers and Great Lakes, settling in New Orleans. Unable to find a publisher for his collection in the United States, he succeeded in London where he stayed from 1826 to 1831, and found William Lizars and Robert Havell, Jr. as engravers. However, the association with Lizars terminated in the first half of 1827.

By 1839, he had achieved his life-long ambition of finishing his four volume series of life-sized bird portraits, The Birds of America. The plates were published between 1827 and 1838, and the accompanying letterpress titled “Ornithological Biography” was completed finished in 1839. This unparalleled study reveals the dynamics of birds living in habitats.

Audubon made several collecting trips back to the United States, the first in 1829, during which he repaired his damaged relationship with his wife, Lucy. On his 1831-1832 trip, he spent time in Charleston, South Carolina where he met the Reverend John Bachman who became a close friend and important ally in helping Audubon to establish a reputation as a credible naturalist. Two of Bachman’s daughters eventually married Audubon’s two sons, Victor Gifford Audubon and John Woodhouse Audubon.

In 1843, he took the steamer, Omega, from St. Louis up the Missouri River to Fort Union and then went overland to the Yellowstone River, making stops in Nebraska in May and October, 1843. Along the way, he saw birds and animals, and he focused on an idea he had begun developing with Bachman in 1836, which was to do a series on American mammals. The purpose of this 1843 trip was to gather specimens for painting, and dressed in Indian hunting clothes, he returned to St. Louis with live deer, badgers and foxes.

Bachman wrote the text for Audubon’s second series, The Viviparous Quadrupeds of North America, which, published in three volumes between 1845-1848, made the reputation of the senior Audubon. His collaborators in this project were his two sons, John Woodhouse who did about half of the animals depicted in the series, and Victor who did most of the backgrounds. Bachman’s sister-in-law, and later his second wife, Maria Martin, also assisted in painting the backgrounds and plants. The Letterpress by Bachman was published in three volumes from 1846 to 1854.