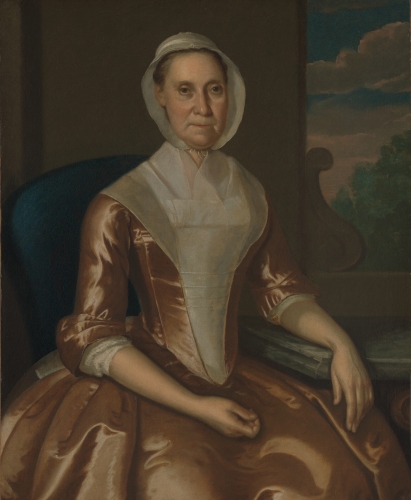 Born to a Swedish family, John Hesselius became one of the leading portrait painters in the Mid-Atlantic colonies. He is noted as one of the earliest teacher of Charles Willson Peale, who later became one of America’s best-known colonial artists and whom Hesselius met at Annapolis in the early 1760s.

He first studied with his father, Gustavus Hesselius, a painter of portraits and religious subjects, but it is not thought that his father had much influence on his style.

The family lived in Philadelphia where he saw the work of portraitist Robert Feke, and this exposure became an ongoing influence as did the painting of John Wollaston, which he saw later in his career when Wollaston was working in the Colonies.

“Charles Calvert”, owned by the Baltimore Museum of Art, is his most famous portrait and depicts a five-year old child, attended by black slaves, and posed as a general of military troops. Nearly 100 portraits survive, and it is thought that he also painted religious and classical subjects, but they have not been authenticated.

He married a wealthy woman from Annapolis, Maryland, and lived as a country gentleman on their estate and gained many lucrative commissions of local prominent persons including the Calvert family whose son was Charles (referenced above). In Virginia, Hesselius was regarded as the “court painter” of the Fitzhugh family, one of the founding families of Virginia, and, visiting Virginia between 1750 and 1760, he did portraits of five generations of that family as well as other portraiture subjects.