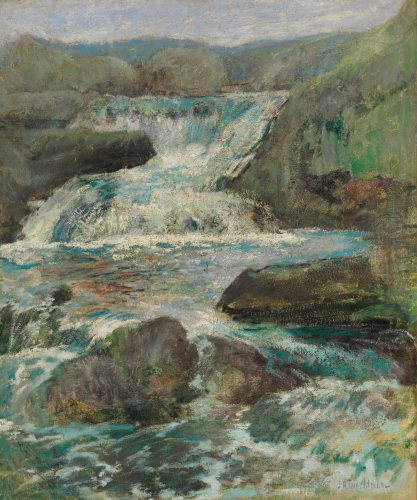 American Impressionist John Henry Twachtman, son of German immigrants, was born in 1853 in Cincinnati, Ohio. Before receiving his first formal artistic training in Cincinnati, he worked commercially as a window-shade decorator. He attended the Ohio Mechanics Institute, transferred to the McMicken School of Design in 1871, and studied with Frank Duveneck from the fall of 1874 until the late spring of 1875. Like many American artists during the late nineteenth century, Twachtman sought European training to supplement his initial study in the United States. Duveneck convinced Twachtman’s parents to allow their son to travel abroad with him. In the fall of 1875, Twachtman enrolled at the Royal Academy in Munich, an important training ground for a generation of Cincinnati painters that included Robert Blum, Joseph DeCamp, Edward Potthast, and Thomas Satterwhite Noble. In Munich Twachtman learned and adopted the rich, dark palette, alla prima (painted all in one sitting) technique, and bravura brushwork associated with Bavarian painting at this time. In the spring of 1877, Twachtman accompanied Duveneck and William Merritt Chase to Venice; however, after his father’s death about nine months later, he returned to Cincinnati.

In the fall of 1883, after spending time in Cincinnati, New York, and several New England towns and taking two more trips to Europe, Twachtman enrolled at the Académie Julian in Paris, where he studied with Gustave Boulanger and Jules-Joseph Lefèbvre. His French-period works display improved draftsmanship and a new interest in representing atmospheric conditions. These pictures also demonstrate Twachtman’s experimentation with progressive trends in landscape painting and his familiarity with images by the French painter Jules Bastien-Lepage, the Hague School artist Anton Mauve, the American expatriate painter James Abbott McNeill Whistler, and Japanese master printmakers Hiroshige and Utamaro.

In the winter of 1885, Twachtman returned to the United States, where he continued to develop his own Impressionist manner. By the fall of 1889, he had found the plot of land in Greenwich, Connecticut, where he would reside for the rest of his life. Unlike other artists, such as his friends Childe Hassam and J. Alden Weir, Twachtman lived in Greenwich all year round and commuted to New York to teach at the Art Students League and the Cooper Institute. In addition, he supported himself intermittently by working as an illustrator for Scribner’s Magazine and by teaching plein air painting at Newport, Rhode Island, and Cos Cob, Connecticut, in the summers. His house and garden on Round Hill Road in Greenwich and the surrounding scenery provided the motifs for many of his pictures during this period.

Inspired by the French Impressionist images he saw in New York and the American Impressionist works of his friends, including Theodore Robinson, who had a close rapport with Claude Monet, Twachtman arrived at a personal Impressionist style. Unlike other American landscape painters of this period who gravitated to especially picturesque or panoramic subject matter, Twachtman favored views that were less obviously grand. For example, in Newport, he chose to paint grassy inland hills rather than the spectacular rocky shoreline. At home in Connecticut, he often painted close-ups of flowers and bits of landscapes, providing quiet, intimate views intended to reflect the spirituality of the scenes. Such choices reflected Twachtman’s belief that ordinary sites best represent “nature’s mystery” and sheltered landscapes capture its contemplative quality. (1) In the 1880s Twachtman adopted a lighter palette and began using quick, vigorous brushstrokes to capture fleeting light effects, but his ultimate goal differed from that of most Impressionists. Twachtman was more interested in capturing the emotions that a place evokes than in expressing how perception shapes experience.

Twachtman actively participated in the New York art world. He exhibited regularly with the Society of Painters in Pastel, the American Water Color Society, and the Society of American Artists. In 1897, frustrated by the conservative attitude of the Society of American Artists, Twachtman and nine friends—DeCamp, Hassam, Weir, Frank Weston Benson, Thomas Wilmer Dewing, Willard Leroy Metcalf, Robert Reid, Edward E. Simmons, and Edmund Charles Tarbell—formed an exhibiting society called the Ten American Painters or “The Ten.” While summering in Gloucester near Duveneck and DeCamp, Twachtman died suddenly of a brain aneurysm on August 8, 1902, only four years after the founding of The Ten. William Merritt Chase replaced Twachtman in the group, which continued to exhibit together until 1918.