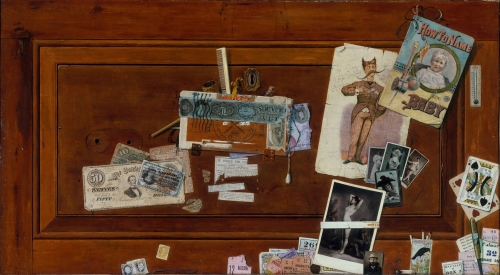 John Haberle became a trompe l’oeil still life painter of subjects that aroused merriment, a sense of abandon, and wacky humor. He spent most of his life in or near his hometown of New Haven, Connecticut, where he worked as an engraver, draftsman, and lithographer, and as a custodian and preparator at Yale University’s Peabody Museum of Natural History.

He produced about forty extremely detailed trompe-l’oeil pictures between the mid-1880s and the late 1890s, before deteriorating eyesight forced him to give up painting.

He taught drawing lessons, founded the New Haven Sketch Club, and exhibited his works at local bookstores, saloons, and hotels as well as at prestigious exhibitions at the National Academy of Design in New York and the Pennsylvania Academy of the Fine Arts in Philadelphia.

One of his trompe l’oeil paintings, Time and Eternity, ca. 1890, is exquisitely painted and extremely detailed, designed to trick the eye into thinking that these are real, not painted, objects. The illusion is aided by the shallow spatial format and by the absolute clarity and precision with which the objects are painted.

The objects hanging from this rough surface would have been familiar to Haberle’s audience. The cracked pocket watch becomes a symbol of the fleeting quality of time, a reference to the traditional vanitas still lifes of the Dutch and Flemish Baroque masters. The playing cards, pawn tickets, betting receipts, and girlie photo are the detritus of daily life; juxtaposed with the rosary they are an obvious contrast between the temporal and the spiritual, the here and now and the hereafter. Haberle’s torn, ragged scraps of paper currency also refer to the passage of time; the word GRAVE (part of the word engraved) is a blatant reference to death, emphasized by the scrap’s proximity to the crucifix.

The moralizing message of the painting is obvious, yet Haberle, in his paintings, often added a note of complexity to the mix by addressing current events. By juxtaposing traditional symbols of vanitas with references to well-known public controversies, Haberle has asked his audience to think for themselves on the profound philosophical and scientific issues that were filtering through late-nineteenth-century society.

The extreme detail and realism made trompe-l’oeils hugely popular with the public, but late nineteenth-century art critics derided such works as mere parlor tricks which lacked art.

Yet Haberle’s works aim not only to fool the eye, but are often ingenious, extremely witty, and entertaining. A rebus waiting to be deciphered, they are an expression of the social and political ideas of the artist’s time.