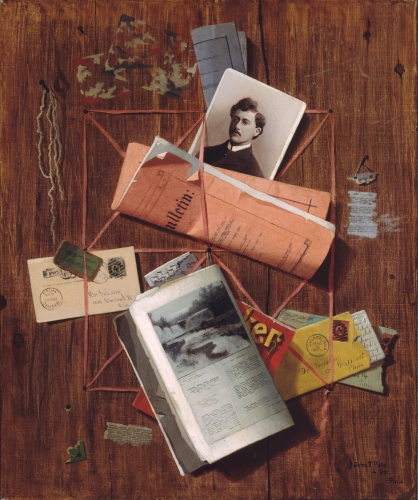 John Peto was born on March 17, 1854 in Philadelphia, Pennsylvania, the son of a dealer in picture frames and later of fire department supplies. Little is known of his early artistic training except that he enrolled in the Pennsylvania Academy of Fine Arts in 1877 and during the next half dozen years he contributed works to its annual exhibitions. While as the Academy he was influenced by classmate William Harnett, “trompe l’oeil” painter. In contrast to Harnett, he painted commonplace subjects that were in disorder and ramschackled.

From 1879 to 1889 Peto tried to live the life of a professional artist by maintaining a studio in Philadelphia. However he was not very successful because he often painted objects that were perceived as ugly and not the pleasing subjects the public wanted. He found he made more money by playing the cornet.

In 1887 Peto traveled to Cincinnati, Ohio, where he met and married Christine Pearl Smith. It was also in the late 1880s that he began visiting the Methodist resort community of Island Heights on the New Jersey coast near Toms River. He and his wife built a house there, living an isolated simple life. He supported his family by playing the cornet for Methodist revival meetings and sold his paintings at the local drug store to friends and local business people.

Peto was apparently a well-liked member of his community and a doting father to his only child, Helen, but his life was often turbulent and unhappy, due to family squabbles, some law suits and ill health. Barely known during his lifetime, he sank into almost total obscurity after his death in 1907. Many of his works survived only because they were mistaken for those of the much more famous William Harnett, and some even wound up with Harnett’s forged signature affixed to them.