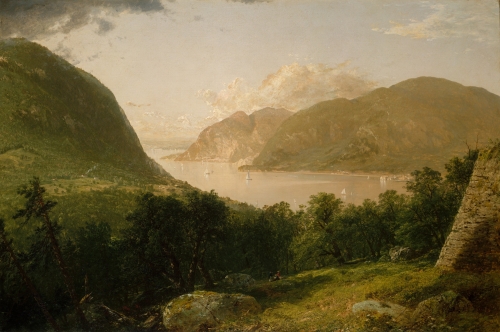 John F. Kensett is considered one of America’s most important 19th-century landscape painters. Deeply influenced by the aims and technique of Hudson River School founder Thomas Cole, Kensett is viewed as an heir to Cole in his leadership of the Hudson River traditon. Kensett was born in Cheshire, Connecticut on March 2, 1816, the son of Thomas Kensett, an engraver, and Elizabeth Daggett. By age twelve, he was working in his family’s engraving and printing business in New Haven. At some point, possibly in 1829 when he was thirteen years of age, he went to New York to work for Peter Maverick, then America’s leading engraver. In Maverick’s shop Kensett met John W. Casilear, five years his senior, who would also become a painter and who would remain Kensett’s lifelong friend.

Following his father’s death, Kensett returned to New Haven to work for his uncle in the family firm, then named Daggett and Ely. Kensett was employed engraving business cards, brass door plates, and maps–all extremely time-consuming and tedious work. Casilear wrote often, encouraging his friend to paint and praising his talent, but Kensett could not afford the art instruction he needed. In 1837, he went to work as a banknote engraver for Harr, Packard, Cushman & Co. of Albany, New York. The following year, he submitted a painting to the National Academy of Design–a painting that not only was chosen for exhibition, but also was favorably critiqued.

In early 1840, having set aside money for travel, Kensett returned to New York City to prepare to go to Europe. On June 1, he set sail for London with Asher B. Durand and his friends Casilear and Thomas Rossiter, a young painter whom Kensett had met in New Haven. Arriving in London, Kensett traveled on to Hampton Court to meet his English relatives, his paternal grandmother and uncle. He visited London’s art galleries and painted and sketched in the nearby countryside. Before the summer was over, he and Rossiter had settled in Paris. He secured a contract to provide engravings for a Philadelphia firm as his means of livelihood and devoted the rest of his time to improving his draftsmanship. He took classes at the Ecole Préparation des Beaux-Arts and studied the drawing collections in the Louvre.

On visits to England made in 1841 and 1843, Kensett sketched avidly, filling notebooks with views made in the vicinity of Richmond, Hampton Court, and Windsor Castle, and setting a pattern of sketching in the countryside that he would follow every summer for the rest of his life. In the British galleries, he studied the works of the Dutch Old Masters and John Constable and began to use these as models for his own paintings.

From October 1845 through the spring of 1847, Kensett lived in Rome. He attended classes where he sketched from live models, and he sketched in the countryside outside Rome and around Florence, Perugia, and Venice, places he visited with his artist friends. He fulfilled commissions for paintings from Americans in Italy, and by 1847 his career was well established.

In November 1847, Kensett returned to the United States to open a studio in New York City. The five paintings he exhibited at the National Academy of Design the following spring were pronounced by one critic to be of higher quality than work exhibited either by Durand or Frederic Edwin Church. Kensett’s participation in this exhibition resulted in his election as an associate of the National Academy. One year later, in May 1849, he was made an aåcademician.

Kensett’s entree into artistic circles in New York and his acceptance into high society were won almost instantaneously. He was called upon to fill many important roles in the art world. He was a founder and president of the Artists’ Fund Society, an organization dedicated to the support of indigent artists, their widows, and orphans. He was chairman of the Art Committee of the Sanitary Fair, which opened in New York in 1864, and he was a founder of the Metropolitan Museum of Art. At the virtual height of this exemplary career, Kensett suffered a fatal heart attack in his New York studio on December 14, 1872.