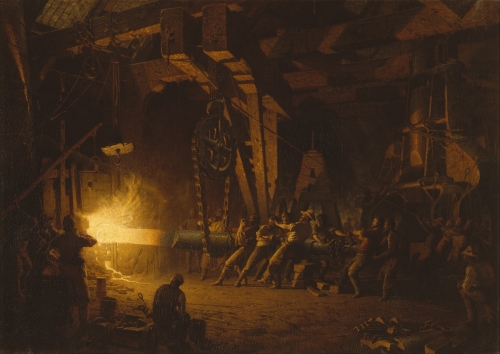 His distinguished reputation was primarily based on his accomplishments as a teacher and administrator. For many years, from 1869 to 1913, John Weir was the Director of the Yale University School of Fine Arts. He was also a commissioner of the art exhibition at the Centennial Exposition in Philadelphia.

Weir was born at West Point, New York, and by age 20, had a studio in New York City in the Tenth Street Studio Building, the first building in America dedicated to art studios, and there he associated with many leading painters of the day.

He earned attention early in his career for paintings of industrial scenes, some of the earliest in American art history. Examples are “The Gun Foundry,” 1866 in the Putnam County, New York Historical Society, and “Forging the Shaft,” of 1867, which was subsequently destroyed. He did them in monumental sizes with much chiaroscuro (contrasting light and dark) effect, showing labor figures in the fiery glow of furnaces.

He spent a year in Europe, painting panoramic landscapes, and then returned to New Haven, Connecticut to become associated with its School of Fine Arts.
Much of the remainder of his painting was impressionist in style and depicted quiet landscapes, especially of the Hudson River region. These pieces, unlike his industrial scenes, did not much distinguish him from the numerous other painters doing the same style and similar subject matter. He also painted portraits including that of Yale president Theodore Dwight Woolsey and Benjamin Silliman, a professor.