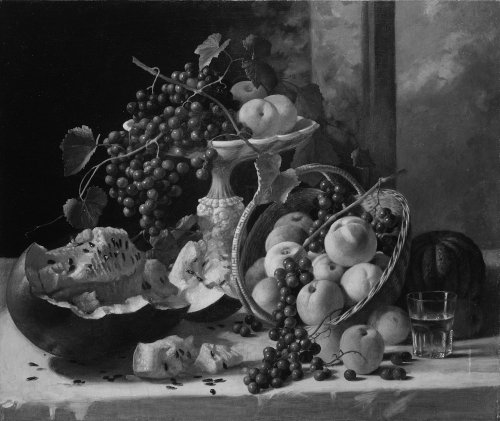 Born in Philadelphia, John Francis became a key artist in the mid-19th century revival of still life painting in America but was not recognized during his lifetime. His focus was “luncheon” or “dessert” type subjects, which he rendered in bright, radiant color, a breaking away from the stern mode taught by the Peale family of artists in Philadelphia.

His style is highly realistic and arguably fits the criteria of trompe l’oeil in that the objects are to scale, are arranged on a flat plane, and thrust forward into the viewer space. There is a suggestion of some disorder, giving the impression that a person has just been there. It is also thought that he influenced Michael Harnett, the founder of trompe l’oeil still life painting, and at least one work by John Frances was passed off as a painting by Harnett.

Most of his work is unsigned and undated, but it is thought that his later work was somewhat freer in style than the earlier.

The early part of his career, he was an itinerant portrait painter and silhouettist in Schuylkill County, Pennsylvania and then spent about 25 years traveling and painting in rural Pennsylvania well as in Delaware, Tennessee and Washington D.C. About 1850, he turned exclusively to still life subjects, using the techniques of 17th-century Dutch still life painters.

The last twenty years of his life, he lived alone and died 1886. No known paintings by him are extant after 1879. According to scholar Alfred Frankenstein in his book, After the Hunt, Francis was a very religious person who died a wealthy man. It was also mentioned in his obituaries that he was a very reclusive, often depressed person who was nervous and anxious to avoid interaction with other people.

He exhibited at the Pennsylvania Academy of the Fine Arts from 1840 to 1858, and he sold many of his still lifes through the American Art Union. After that time, he abandoned his career and life in Philadelphia because of the death of his wife and two children.