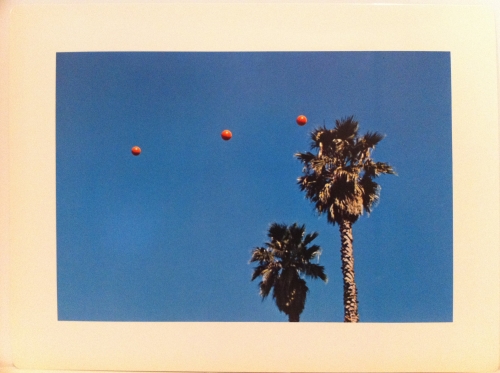 Throwing Three Balls In The Air To Get A Straight Line, 1973

John Baldessari was born in National City, California on June 16, 1931. He studied at San Diego State College, where he received a Bachelor of Arts degree in 1953, and a Master of Arts in 1957. John Baldessari married Carol Wikom in 1962, and they had three children. He was an instructor at the Fine Arts Gallery, San Diego, San Diego city schools, San Diego State College, La Jolla Museum of Art and Southwestern College; Assistant Professor of Art at University of California at San Diego and Professor at California Institute of the Arts in Los Angeles, Visiting instructor at Hunter College, New York. John Baldessari received a grant from the National Endowment for the Arts in 1973, 1974 and 1975.

John Baldessari has been described as a leprechaun on stilts; he is 6 foot-7 inches tall, his hair and beard are snow-white and he is endowed with a really prankish wit. John Baldessari has evolved during his career from naive philosopher to sophisticated moralist albeit with a troubled spirit. He applied unsuccessfully to the Princeton Theological Seminary; then John Baldessari set up shop as an artist in his hometown of National City, California and started teaching.

Feeling painting to be hopelessly elitist, John Baldessari in 1970 ceremonially cremated all his work previous to 1966. He did his best work in the 1970s utilizing sometimes prosaic photographs with allusions to modern art. Each canvas paired an inkjet print of a photograph of an object with text printed below it in black letters by a sign painter. John Baldessari gave the exalted title “Goya Series” to these works; but for all his efforts to break down art to the “lowest common denominator”, the work still remains somewhat obscure.