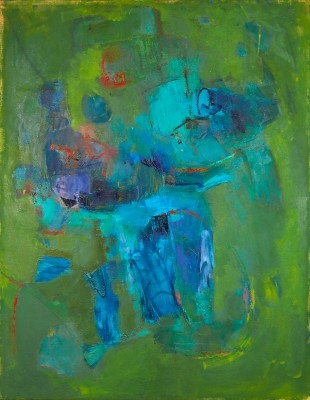 John Altoon was born on November 5, 1925 in Los Angeles, CA. The brief but transformative career of painter John Altoon is a demonstration of the changes taking place in the aesthetic and pathos of American post-war Abstract Expressionism. John Altoon attended both the Otis Art Institute and the Art Center College of Design in Los Angeles from 1947-1950 following his naval service in World War II. During this period, John Altoon continued to emphasize drawing and began to learn more about illustration. Although John Altoon found success at the Art Center College of Design, he resisted the restriction of the assignments and soon left. It was not until he attended the Chouinard Art Institute that John Altoon found recognition for his unique ability in draftsmanship. In 1951, John Altoon left Santa Barbara for New York City to pursue a career in graphic design and illustration. During his four years in New York City, John Altoon began to reconcile his commitments to fine art on the one hand and illustration on the other in the face of the two widely different paths that each discipline held for him. It should also be noted that John Altoon was living thru one of the most volatile periods in the history of American art with the emergence of Abstract Expressionism. The generations following the vanguards of this new style found it difficult to adopt both its formalist and essentialist principals and lofty aesthetic-philosophical justifications. Despite the academic training that John Altoon received in both California and New York City, Abstract Expressionism was still at this time foreign to the more traditional teachings of the art schools.

Having won the Emily Lowe Competition of 1954, John Altoon progressed in his already developing abstract expressive style in Spain and France. The works of this brief period mixed his drawing skillfully with washes and scumbled areas to create a unified all-over composition. In his progression from drawing to painting, John Altoon began incorporating new materials and applications into his process. Using rag paper as well as canvas he aggressively applied oil in a variety of strokes, swipes, and scrapes. These methods and instruments of application were not new to painting as a discipline, but provided John Altoon with the means to express the nervous and erratic energy that already pervaded his drawings. The creative source underlying all of the paintings of the artist was his own self-induced tensions and demands for success.

During the late 1950s and early 1960s, it was difficult for young artists in the wake and shadow of early Abstract Expressionists such as Pollock and Rothko to adapt to the formal and at times metaphysical prescriptions for the new style. This misapprehension was compounded for John Altoon by the apparent split he saw between his own personal experience with illustration and drawing versus the demands of the art world to produce grand, self-sufficient, abstract works of art. Despite these difficulties, the academic experience and formal training of the artist in illustration and drawing as well as his albeit limited exposure to Abstract Expressionism and Surrealism in both Europe and New York in the early 1950s gave him a unique perspective. John Altoon brought back to the Los Angeles art scene an eclectic and academic, while personally expressive form of painterly abstraction.

John Altoon was able to adopt the more technical tenants of the new style, such as the emphasis on gesture and the process of application as well as the preference for an all-over, abstract, atmospheric space of canvas. At the time, the philosophy of Abstract Expressionism was that painting reduced the interaction and balance of its most essential components light, color and line. Furthermore, it was held that it could achieve purity as both a discipline and an art in which the artist is figured as a transcendent creator, whose work and process are dissociated entirely from the world. In contrast, this method finds no place in the work of John Altoon. The disinterest and detachment associated with modernist abstraction is displaced by the honest and intimate expression of the artist. The work of John Altoon is rooted in a location or in a milieux which is far from isolated in the progressive purification of socially alienated art. The idiosyncrasies of the works of John Altoon are not formal designs that effect a balance or harmony. The turbulence and imbalance of his compositions and process correspond directly to the intense personality of John Altoon and the vibrancy of his creative environment. Along with the other artists exhibiting at the Ferus Gallery such as Ed Kienholz, Richard Diebenkorn, and Sonia Gechtoff, the stylistic and formal as well as expressive progression of the works of John Altoon defy the standard art historical criteria by which abstraction is judged and qualified.

Part of the importance of a figure such as John Altoon to the Los Angeles art community of the 1950s was his introduction of the techniques of Abstract Expressionism at a time when academies were still far too conservative to teach the methods and philosophy of abstract expressionism. After his return to Los Angeles in 1956 from his sojourn in New York, Spain and Paris, the paintings of John Altoon begin to demonstrate his progressive construction of an individual, expressive, and abstract style. It is also at this time that John Altoon began teaching drawing at the Art Center College of Design. Despite the fact that his drawings in ink, pencil and gouache constitute a much larger part of his portfolio, the paintings of John Altoon throughout the 1950s and 1960s demonstrate a series of dramatic investigations into the formal, autobiographical, and erotic potential of painting.

By 1960, John Altoon had almost mastered the idea of a painting as a series of gestures in combination with more vibrant and contrasting coloring than the restricted palettes of East Coast abstraction and minimalism. The paintings of John Altoon produced between 1958-1960 exhibit a steady articulation of forms where representational drawing is minimized, but the calligraphic and textural aspect of drawing is retained. Before the more widely known figural and biomorphic paintings and drawings of the artist in the early and mid-1960s, in which figures are isolated in relation to both each other and a single-tone background, John Altoon used the entire field of the canvas as a means to and stage for personal expressions of urgency, movement, and immediacy. These all-over paintings were an attempt to accommodate both himself and his art to the vital new influences of the time. Throughout his struggle to intuitively create work using only a more technical understanding of the tenants of Abstract Expressionism, John Altoon grew cynical about the increasing schoolishness of his contemporaries.

These themes of movement and immediacy are not merely descriptive or formal elements, but extend into the often-mythologized personal life of John Altoon. The artist suffered from severe and sporadic episodes of psychological and emotional turmoil, which left him quivering and uneasy. The repetitive, exaggerated, and aggressive brushwork and scraping into the surface of the paintings by John Altoon are much more than indicators of his draftsmanly use of paint. The force of such drama and gesture is heightened by the characteristic use of unorthodox materials to lay on thick areas of tone. John Altoon worked with a wide array of tools such as plasterers tools, rags and knives. The artist gave drawing a special prominence in his work. His paintings express the turbulence and vibrancy of John Altoon and his membership in the community of artists at Ferus Gallery. The scene spawned by the Ferus Gallery enabled John Altoon and other highly idiosyncratic and creative personalities to gather and collaborate. Between 1960-1962, John Altoon paintings such as Untitled (1960) and the later Ocean Park Series (1962) were represented in one and two-man shows at the Ferus Gallery.

In the Ocean Park Series of paintings as well as his works in ink, pencil, and mixed media, John Altoon harnessed Abstract Expressionism to convey his own feelings while adopting the automatism practiced since the mid-1920s by the French Surrealists. In addition to the Expressionist, calligraphic spontaneity of his brushwork, the influence of Surrealism is evident in the attack by John Altoon on both the subject and form of his paintings as well as his use of eroticism, caustic humor, and dream imagery. The work of John Altoon began to incorporate the biomorphism of Willem de Kooning and Arshile Gorky in addition to the ambiguity and improbability of space in ground and figure relationships of early Joan Miro. In the mid-1960s, John Altoon began to incorporate word-play in his works where he ripped slogans and fragments from various magazine advertisements to create ironic, sexual, or critical juxtapositions between text and image. From series to series, John Altoon constantly re-negotiates his own form of personal expression in conjunction with the influence of different contemporary movements.