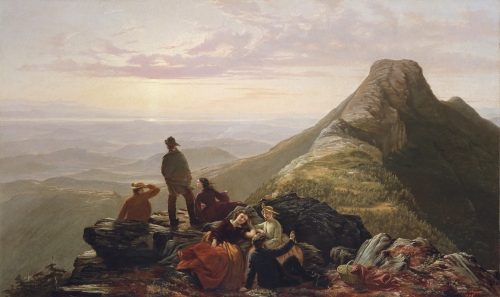 The Belated Party on Mansfield Mountain, 1858

Born in Middleboro, Massachusetts, Jerome Thompson became a painter of luminous landscapes, often allegorical with rural figures in the foreground. His father was Cephas Thompson, distinguished portrait painter, who refused to give Jerome art lessons and even destroyed his early paintings because he wanted him to be a farmer.

As a youth, Jerome moved with his sister to Barnstable, Massachusetts and earned money as a sign and portrait painter. He painted Daniel Webster, and Abraham Quary, the last surviving member of the Nantucket Indian tribe. In 1835, he opened a portrait studio in New York City, but a landscape, A Pic Nick, Camden, Maine, that he entered in the 1850 National Academy exhibit, changed the direction of his painting because it got so much positive reaction.

In 1852, he went to England for several years of independent study and changed from exhibiting originals to lithographic reproductions of his work. These copies earned him financial success. After returning from England to the U.S., he painted in the Berkshire Mountains, did some romantic western landscapes and Indian subjects including Hiawatha.