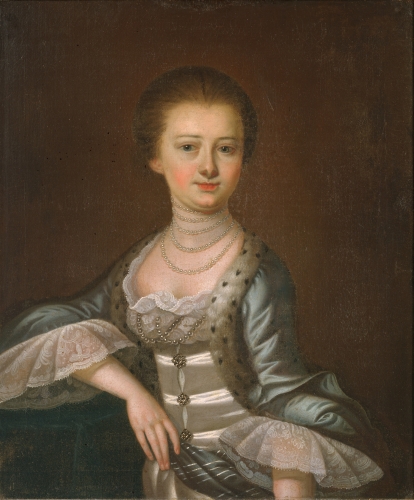 Born in Chur, Switzerland, Jeremiah Theus became the most important artist of the colonial era in Charleston, South Carolina, and most of his paintings remain there and in Savannah, Georgia. He had little competition and was a favorite of the more prominent plantation and merchant families.

His early training is unknown. He and his parents emigrated to Orangeburg Township, South Carolina about 1735. In 1740, he advertised in Charleston as a limner of portraits, “landskips,” and crests for coaches. He was immediately successful, and became the regions’ most established artist, painting about 150 portraits.

For 30 years, he traveled a radius of about 100 miles from his Charleston studio to paint subjects in the Carolinas and Georgia. His figures are adequate but to some critics appear quite stiff with features that tend to be similar in each portrait.

In 1744, he opened an evening drawing school for men and women. He prospered, had a comfortable home, and owned seven slaves.

Sources include:
Michael David Zellman, 300 Years of American Art
Peter Hastings Falk, Editor, Who Was Who in American Art