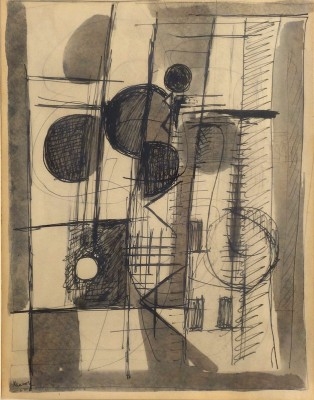 A modernist artist who emigrated to America from Greece in 1904, when he was fourteen years old, Jean Xceron is described as having a reputation as an artist that has mysteriously fallen into obscurity—especially since he was reportedly quite prominent during his lifetime. However, a partial explanation of that omission is the fact that many of his papers and early records have been lost. He was a painter of biomorphic abstractions and did collages, which were influenced by Dadaism.

Xceron was active in New York City when modernism was gaining influence. Of him during this period, it was written that his artistic role was “a vital link between what is commonly termed as the first-generation (the Stieglitz group, the Synchromists, etc.) and second-generation, the American Abstract Artists, the Transcendental Painting Group . . .” (Vrachopoulos) Because the abstract influence that moved into the New York art world after World War I went into abeyance during World War II, Xceron somehow has gotten classified as part of the second generation but omitted as part of the pioneers. However, examination of his paintings and knowledge of his activities indicate he was consistent with his unique abstract style from 1916 to 1932. After that, his work became totally abstract.

He was born in Isary, Greece with the birth name of Yiannis Xirocostas. Upon arrival in America, he lived with various relatives around the country, and then between 1911 and 1912, studied at the Corcoran School of Art in Washington DC. At that point, he changed his surname to Xceron, and he was called John, which is the English translation for Yiannis. However, when he later studied in France, he was called Jean, the French equivalent of John, so those first names have been used interchangeably. The next year, after graduating from the Corcoran, Xceron moved to New York City.

He, like many of his artist peers, was much influenced by the 1913 Armory Show, a venue that made provided many Americans their first exposure to modernist or abstract art, much of it imported from France. At that time, Xceron was affiliated with the artists around Alfred Stieglitz, who was about the only promoter of modern art in America, something he did through his New York City Gallery 291. Borrowing some of the abstract Armory Show works that Stieglitz had obtained, Xceron and some colleagues staged their own exhibition in Washington DC. This marked him and his group as being rebels, that is in violation of academic methods prescribed by those who set those standards at the National Academy of Design.

Underscoring Xceron’s commitment to non-traditional artwork was his membership in the Society of Independent Artists as well as his close association with Cubist painter Max Weber, Futurist painter Joseph Stella, and Dada Greek poet, Theodoros Dorros.

In 1927, he went to Paris to further his art career, which included study at the Ecole des Beaux Arts; he remained for ten years, leaving as World War II approached. He earned money by writing art reviews for the European editions of the Chicago Herald Tribune, the New York Herald Tribune, and the Boston Evening Transcript. In this capacity, he became a link as a writer between the European avant-garde and the American public. But he also did much artwork that aligned him with the French modernist movements, and by the time he returned to the United States, his work was totally abstract. In 1938, he joined the American Abstract Artists, a group that was quite controversial in the 1940s and 50s in America because it was so different from the prevalent American Scene painting.

Many of the Europeans artists fleeing Europe became associated with Xceron in New York City during the war years of the 1940s such as Fernand Leger and Piet Mondrian. In fact, Xceron was the person Mondrain first wrote to when he decided to leave Europe and needed help.

Xceron’s work was added to the collection of the Museum of Modern Art; he received a mural commission for Riker’s Island under the Federal Art Project; and in the 1940s and 1950s, he was employed in a Registrar capacity by Hilla Rebay at the Solomon R. Guggenheim Museum. In that position, he was able to do his own painting as well in his spare time, and he had gallery exhibitions and regular exposure at the Guggenheim in their non-objective shows. In the late 1940s and early 1950s, his work reflected Abstract Expressionism such as in the painting commission, Radar, he did for the University of Georgia.