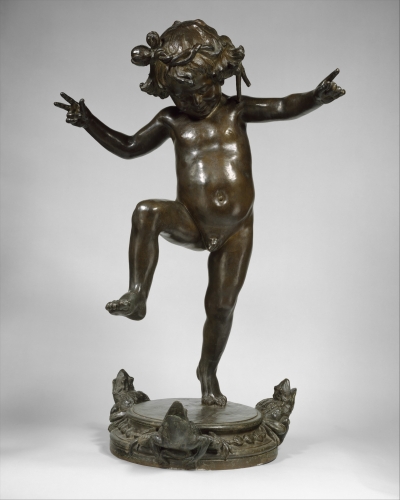 Janet Scudder, arguably the most famous artist to have come from Terre Haute, was born Netta Deweeze Frazee Scudder in 1869 (not 1873 as she would have people believe). Her first art training began with Saturday drawing classes at the Rose Polytechnic Institute (now the Rose-Hulman Institute of Technology), where one of her classmates was Caroline Peddle (Ball). Scudder and Peddle were admitted to the all-male institute through the influence of Peddle’s father, who was on the board of the school.

In 1887, Scudder entered the Cincinnati Academy of Art. The school’s registrar told her that Netta was not a real name and, after much consideration she changed her name to Janet, which she thought suggested seriousness and strength. According to her autobiography, “I finally reached the conclusion that Janet Scudder was the name that suggested something I wanted to be.”

She experimented her first year with drawing and decorative design, but her first experience with clay changed her outlook. “The feel of that clay in my hand was entirely different from anything I had ever experienced before. Just the mere sensual part of it, the touch, seemed to fire me with something tremendously stimulating,” she later wrote.

To help support herself, money was tight, she got a job as a wood carver (after taking woodcarving classes) making ornate mantles for the elegant homes in Cincinnati. Her father died after her first year, but with support from an older brother and her woodcarving job she was able to remain at the Academy for two more years. Louis Rebisso, an Italian-born artist, gave weekly criticisms to the sculpture class and gave Scudder genuine encouragement.

In 1890, she moved to Chicago to live with her brother and his wife and worked in a woodcarving factory. When the union got wind of the fact that a woman was working there they threatened to strike and Scudder had to resign her post. Around 1891, Lorado Taft hired Scudder to work on architectural ornaments intended to adorn some of the buildings erected for the World’s Columbian Exposition. According to Scudder, when Taft asked the director of the fair if he could hire women to help with the enormous amount of sculptural work, the director told him “to employ anyone who could do the work of white rabbits if they would help out.” The assistants continued to be known as “white rabbits” a name made more appropriate by the fact that they were usually covered with plaster dust.

The women were paid $5.00 a day and $7.50 on Sundays, and they lived in a hotel near the fairgrounds. Scudder reported that on their first monthly payday she and several friends returned with their salaries, which were paid in five-dollar bills, and covered the floor of their room “to see what it felt like to walk on money.”

After two years abroad, and with letters of recommendation from MacMonnies in hand, Scudder returned to America hoping to find work in New York. She had a very difficult time finding work as a studio assistant for any of New York’s established sculptors. She supported herself with free-lance jobs for architectural firms, commissions for memorial plaques and funerary urns, and portrait medallions.
By 1898, she had returned to Paris and returned to draw at the life classes at the Académie Colarossi.

During her second stay abroad her work met with considerable success. She had a plaster bas-relief accepted for the 1899 Salon, and for the 1900 Exposition Universelle she modeled an allegorical figure of Music. During the winter of 1899-1900, Scudder traveled to Florence where, according to the artist, she “discovered” Italian Renaissance sculpture. Frog Fountain (Swope Art Museum, Terre Haute, Indiana), modeled soon after her Italian trip, was the first of what Scudder referred to as her “water babies.”

In 1901, Scudder returned to New York determined to make a name for herself with her garden sculptures. However, soon after her return to New York she left for six months in China and Japan as a guest of Anne Archbold, daughter of John D. Archbold of Standard Oil and her career as an artist was sidetracked. While overseas she lost an important commission she had received and when she returned to New York had to begin again.

Like all the decorative sculptures for the Exposition, these works were made of staff material-a composition of plaster and straw which was quickly worked and inexpensive, though unfortunately not durable when exposed to the elements; as a result almost nothing of these staff creations has survived.

Scudder was also commissioned to create the statue of Justice for the Illinois State and the figure Nymph of the Wabash for the Indiana State building. The Justice was destroyed by fire and Nymph of the Wabash, which was in the Emeline Fairbanks Memorial Library for years in Terre Haute, Indiana, has disappeared.

At the fair, Scudder saw Frederick MacMonnies’ Barge of State (now destroyed) and decided she simply had to study with him, whether he accepted students or not. She arrived in Paris in 1894, accompanied by Zulime Taft, Lorado Taft’s sister. After a few weeks in a studio loaned to them by painter Bryson Burroughs and his wife sculptor Edith Woodman Burroughs, Scudder settled at the American Girls Club and convinced MacMonnies to hire her as a studio assistant. Scudder also attended drawing classes at the Académie Colarossi and on her own initiative enlisted a group of fellow women students for a drawing class. The women shared expenses for the studio and models, and MacMonnies came periodically to give criticism.

For the Pan-American Exposition held in Buffalo, New York in 1901, Scudder contributed her Bar Association Seal (an 1898 commission), and other works. Back in New York she tried to make contact with Stanford White, of the renowned architectural firm McKim, Mead, and White. Scudder eventually succeeded in meeting White who, not only provided her with many commissions over the years, but who also purchased a version of Scudder’s Frog Fountain. This work proved to be one of Scudder’s most popular sculptures. Only three other bronzes as large as the Swope version were produced. The last was acquired by the Metropolitan Museum of Art in 1906. Scudder generally limited the edition of her larger fountains to four casts but reproduced the smaller versions in unlimited editions. For example, Frog Fountain” was also cast in a 6-inch size, of which Roman Bronze Works made at least thirteen between 1912 and 1919. Records of the Gorham Company list thirty-six casts made between 1918 and 1920.

Through Stanford White, Scudder received numerous commissions for fountain and garden sculptures, and she quickly rose to the pinnacle of success. She designed garden statues and fountains for many of New York’s elite including John D. Rockefeller. Beginning in 1903, Scudder exhibited her works at the National Academy of Design in New York, the Pennsylvania Academy of the Fine Arts in Philadelphia, and elsewhere. Throughout the 1910s, Scudder participated in one-person and group exhibitions in Europe and America. With the success of her sculpture she achieved growing popularity and social status. She joined the Cosmopolitan and Colony Clubs in New York and counted amongst her friends actress Julia Marlowe, and writers Henry Adams and Gertrude Stein.

Also during this period she created one of her most famous and delicate works, Young Diana. Betty Burroughs, daughter of Bryson Burroughs, curator of paintings at the Metropolitan, posed for the Diana. The original over-life-size sculpture had a marble base composed of three greyhounds. Malvina Hoffman, another American woman sculptor, was working as Scudder’s assistant when this project was being executed and, reportedly spent hours “hypnotizing” the model, a dog owned by French illustrator Louis Maurice Boutet de Monvel. The work was completed in 1910 and shown at the American Pavilion of the Rome Exposition in that year. In 1911, the sculpture won an honorable mention at the Paris Salon.

In 1913, Scudder purchased a home in Ville d’Avray, a small town a half-hour outside Paris. When World War I broke out, Scudder lent the Red Cross and the YMCA her house for the duration of the war and worked periodically as a war volunteer, dividing her time between New York and France. During the war years she continued to sculpt and exhibit her works and received numerous commissions. Several of her sculptures and fountains were exhibited at the Panama-Pacific International Exposition in San Francisco in 1915. The same year she received a commission to create the centennial medal for the State of Indiana from the Indiana Historical Commission.

Once Scudder’s reputation was established, she divided her time between New York and France. She continued to have success with her garden sculptures and fountains and in the 1930s took up painting. She had an exhibition of her paintings at Macbeth Gallery in New York City in 1933.

When World War II began, Scudder returned to New York with Marion Cotherin, a children’s book author who had been Scudder’s companion for about five years. In October of that year, she visited her hometown for the first time in more than forty years. An exhibition of her paintings and sculptures was held at the Woman’s Department Club and she was warmly received as one of Terre Haute’s most famous citizens. She died eight months later of pneumonia in Rockport, Maine.