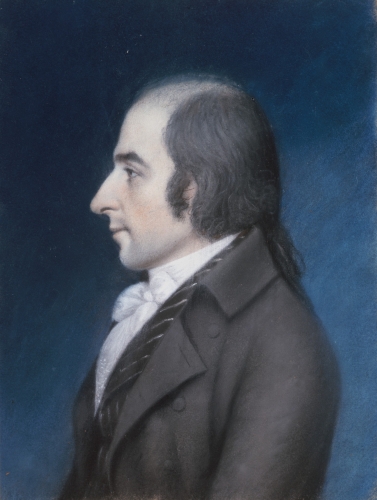 The family spent four years in Philadelphia and four in New York City. They returned to Bath in 1801, but in 1806, Felix and James, Jr. came back to America. Three years later, the rest of the family followed. When James, the father, died, his wife, his daughter and James, Jr. returned to Bristol, where they finally settled.

Sharples family members were specialists in pastel portraits of cabinet size, smaller than life, but larger than miniature. They were usually on thick gray paper, the wooly texture of which gives a soft, grainy appearance to the very sensitive draftsmanship. The likenesses are sometimes in the common three-quarter view, but many are in profile. The highlight of the their work was the often-replicated likeness of George Washington, done about 1796 or 1797.

The various members of the family worked so closely together that it is impossible to distinguish among their hands. Fine examples are usually assigned to James, Sr., but his wife, Ellen Sharples, was equally talented and, though she seems often to have copied her husband’s pictures, she undoubtedly created original examples as well.

There is a large collection of their work in Bristol, England. James Sharples died in 1811.