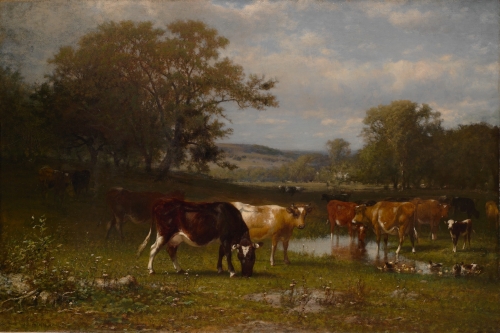 Born in Kilmarnock, Scotland, James Hart was a leading figure of the second generation Hudson River School painters and was known for idyllic landscapes, especially with cows. His family emigrated to Albany, New York in 1830 when he was age two, and Hart, at age 15, apprenticed to a sign and banner painter in Albany. Later he switched to portrait painting.

At age 22, he went to Germany and enrolled in the Dusseldorf Art Academy for three years and returned to Albany where he opened a studio and taught and painted until 1857 when he established a studio in New York City. There members of the newly rich, post-Civil War society were delighted with his serene, rural landscapes. It was a time when New York “swarmed with people newly rich and feverishly eager to acquire at once the trappings and paraphernalia of culture, oil paintings included. With such clients Hart and his brother, William, found abundant employment for their painting in a language intelligible to the artistically illiterate. James garnished his landscapes with barnyard animals, chiefly cows, and painted them with such fidelity that his delighted customers thought they could distinguish the Alderneys from the Guernseys.”

His farm family teased him about his painting of farm animals, saying he knew little about them first hand. In the 1840s and 1850s, he also painted panoramic, luminous landscapes in meticulous details with many figures including farmers and children. The idea was to suggest that rural America was an idyllic place.

Of his cow paintings, G.W. Sheldon wrote in “American Painters”: For cows and oxen, he has the fullest sympathy. Their thoughts which are not men’s thoughts, their ways, which are not men’s ways, and their faces which do not depend for interest upon any human likeness or suggestion, have been the objects of his studious love. He says that he likes cattle as well as landscapes—and this, for an artist like him, is saying a great deal.” (50)

James McDougal Hart served as the Vice President for three years of the National Academy of Design. He was voted a full member in 1859.

Sources include:
Letitia Falk, daughter of the artist, in materials submitted by Ashley Bracken
Peter Falk, Who Was Who in American Art
Matthew Baigell, Dictionary of American Art
G.W. Sheldon, American Painters