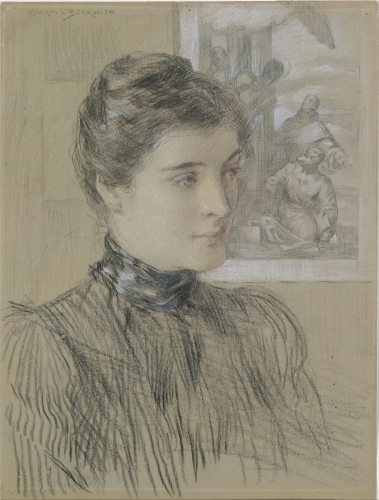 James Carroll Beckwith was a landscape, portrait and genre painter whose style ranged from academic to impressionist. He is best known for portrait and genre subjects, was skilled in mural painting, and was highly respected as an art educator.

Born in Hannibal, Missouri in 1852, Beckwith, who intensely disliked his first name of James, had childhood education at several New York and Ohio military academies, but at age nine, was withdrawn because of severe inflammatory rheumatism. The remainder of his life was troubled by ill health.

He moved with his parents to Chicago, and, showing art talent, was enrolled at the Chicago Academy of Design. His good friend was Frederick Stuart Church, and they took instruction together drawing from the antique under the tutelage of Conrad Diehl.

In 1871, Beckwith’s father’s merchant business was destroyed by the Chicago fire, so the family moved to New York City. There Beckwith enrolled in the antique class at the National Academy of Design under Lemuel Wilmarth. Although poor health led to irregular class attendance, Wilmarth remained very encouraging, and the next year Beckwith was accepted in the life class. Among his fellow students were George Bellows, J. Alden Weir, Albert Pinkham Ryder, and his Chicago friend, Frederick Church who also had moved to New York. During this time Beckwith was helped financially by a wealthy uncle and art patron, John H. Sherwood.

In October, 1873, Beckwith sailed for England, and spent the next five years abroad, living primarily in Paris where he entered the studio of Emile Carolus-Duran. Of this period, he later wrote: “I think my real Art life began.”

Carolus-Duran’s reputation was for painterly, flashy portraiture, and Beckwith, one of his favored students, became his chief studio assistant. Together with John Singer Sargent and Frank Fowler, he helped Duran in 1877 with the Luxembourg Palace ceiling decoration, The Apotheosis of Marie de Medici. With Sargent, Beckwith shared a studio in Paris, and they developed a lifelong friendship. In fact, the American students of Duran were regarded as renegades, and they tended to band together, often sharing travels. With a group of ‘renegades’ in Munich in 1875, Beckwith met William Merritt Chase, whom he declared was “the greatest American student in Europe.”

Realizing that his stylistic inclinations differed from Carolus-Duran and that he needed training other than with this mentor, Beckwith enrolled in the Academie Suisse and studied evenings with Leon Bonnat. In 1875, having failed at his first attempt, he was admitted to the Ecole des Beaux Arts where he attended classes but also remained fully committed to his duties with Carolus-Duran.

Beckwith returned to New York in 1878, and he and William Merritt Chase were hired at the same time as instructors at the Art Students League. Known as “Becky” and adhering to strict academic drawing strictures, he held this position for the next twenty years. “Chase’s freer painting class was seen as a foil to the rigor of Beckwith’s method.” Beckwith also taught classes at the Brooklyn Art Guild and Cooper Union.=

Following his time in Europe, he devoted his own painting to portraits and idealized female figures. He moved into the Sherwood Studio Building, owned by his uncle, on 57th and 6th Avenue, and remained there until 1910, when he went to Italy. He exhibited annually at the National Academy of Design from 1877 until his death in 1917. He was active with the Society of Painters in Pastel, American Watercolor Society and Society of American Artists, which he served as treasurer from 1881 to 1887. In 1884, Beckwith and William Merritt Chase organized an exhibition to raise funds to construct the pedastal for the Statue of Liberty, and then Beckwith served on that Council from 1895 to 1901. For the 1893 Chicago World’s Fair Exposition, he painted murals for the dome of the Manufactures and Liberal Arts Building.

Beckwith received several awards including Honorable mention at the Paris Exposition of 1889 and Gold Medal at the Atlanta Exposition, 1895.

Selling the contents of his studio, he with his wife, Bertha, moved to Italy for two years, 1910 to 1912, where he did landscape sketches. Then he returned to New York City, but felt increasingly out of touch with the times because his conservative style of painting was not in accord with changing tastes and was not earning the money he had hoped. In 1917, just before his death, he was in California, visiting his friend, Thomas Moran, who was eighty years old. Returning to New York state to his summer home in Onteora, he began writing his autobiography, Souvenirs and Reminiscenses, but he died before completion. His wife donated the manuscript, which covered the years of 1871 to 1917, to the National Academy of Design where it remains in the archives.

Of the career of James Carroll Beckwith, it was written: “In the minds of his fellow artists, the name of J. Carroll Beckwith stood for an unwavering commitment to the highest ideals of academic art. Throughout his career Beckwith remained true to his French training, first as a young portrait painter fresh from years of Parisian study, then as an influential teacher of careful, accurate drawing and finally as an uncompromising conservative bemoaning the state of early-twentieth-century art.”