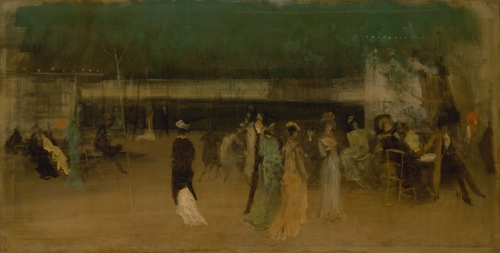 Born in Lowell, Massachusetts, James Whistler became one of the most influential late 19th-century American painters and etchers, although he lived primarily in England. He worked in a wide variety of styles that included Impressionism, Symbolism, and Art Nouveau. He was especially influential in the Tonalist movement and was a catalyst for those who wanted to break away from prescribed academic methods, credited with being the first American modernist to influence European art.

He also created 179 lithographs, having received a commission in 1879, and from that time, he worked in graphics, pastel, and watercolor, and favorite subjects were subtly delineated cityscapes or ships at docks.

He was raised both in New England and in Russia where his father, an engineer, was commissioned by the Czar to build the Moscow-St. Petersburg railroad. In 1847, Whistler went to London for his sister’s wedding to Seymour Haden, a key figure in 19th century etching, and association with this man stimulated Whistler’s interest in that medium.

After the father’s death in 1849, the family returned to the United States, and he entered the Military Academy at West Point where he did illustrations for student publications and also worked as surveyor and cartographer in U.S. Coastal and Geodetic Surveys.

In 1855, determined to have a fine art career, he sailed for Europe and never returned to the United States. He studied in Paris with Charles Gleyre and became a part of avant-garde circles that included Henri Fantin-Latour, Alphonse Legros, Edouard Manet, Gustave Courbet, and Edgar Degas. In 1859, he settled in England but stayed in close touch with his Parisian friends.

His style was independent of realism and of those such as John Ruskin who thought art should have a moral purpose. To many his paintings were a mystery because they seemed dreamy, abstract, and somewhat ghost-like. For some of his works, he chose musical titles to remove them from narrative context.

Ruskin accused him of doing paintings that were like “flinging a pot of paint in the public’s face,” and the two faced each other in court when Whistler sued Ruskin for damages. Whistler won the lawsuit but was awarded only one farthing, which left him financially broke and bitter. However, he gained a lot of attention and positive recognition.