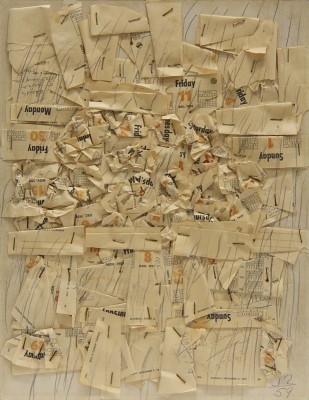 A literate man uncertain whether to become a poet or painter, Jack Tworkov became an Abstract Expressionist who is known for that style modified with gridlike restraint of forms and low-key color. Jack Tworkov was also an art educator. From 1963 to 1969, Jack Tworkov was Chair of the Art Department at Yale University, and he also held teaching positions at Queens College, 1948 to 1951; Black Mountain College, summer of 1952; Pratt Institute, 1955 to 1958; 1972, and American Academy in Rome. Excepting for temporary periods of time, Jack Tworkov lived primarily in New York City and Provincetown, Massachusetts.

At Yale, where he was Visiting Professor of Art from 1961-1963, and Department Chair from 1963-1969, Jack Tworkov was stirred by questions of the interrelationship of psychology, education, political history and art creativity and, as a result, instigated cross-disciplinary study. Among the future ‘big-name’ artists Jack Tworkov mentored were Jennifer Bartlet, Robert Mangold, Chuck Close and Nancy Graves.

Jack Tworkov was born in Biala, Poland, and at the age of thirteen immigrated to New York City where in 1928, he became a US citizen. He studied at Columbia University from 1920 to 1923, majoring in English. Jack Tworkov left Columbia to attend the National Academy of Design from 1923 to 1925, and from 1925 to 1926, at the Art Students League. During this period, Jack Tworkov did landscapes, still lifes, portraits, and figure studies that show the influence of European modernism, especially the paintings of Paul Cezanne.

From 1935 to 1941, Jack Tworkov worked in the Easel Division of the WPA Federal Art Project, and by the 1940s was deeply involved in Abstract Expressionism with work characterized by broad, spontaneous brush strokes. Jack Tworkov loved the camaraderie of painting, especially with Karl Knaths, Franz Kline, and Willem DeKooning, the latter with whom Jack Tworkov had an adjoining studio from 1948 to 1953. However, in the early 1940s, his career like that of so many was interrupted by military service, which he served as a tool designer.

In 1958, Jack Tworkov established a permanent studio in Provincetown, Massachusetts, and worked there from May to November until his death in 1977. In 1963, as Chair of the Yale Art Department, Jack Tworkov became close to Josef Albers whose Geometric Abstraction influenced his own style of small, measured brush strokes. He was determined to subvert his individuality into a coherent, measured system, which meant Jack Tworkov was much less spontaneous than most of his peer Abstract Expressionists.