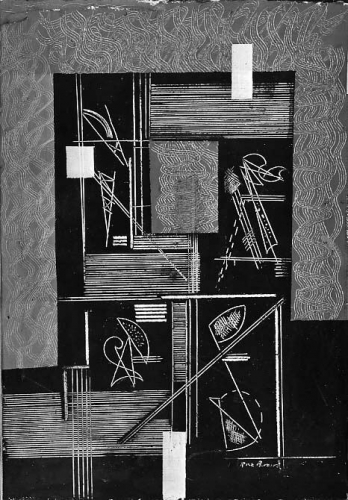 An abstract painter, Irene Pereira developed a style that some critics called ethereal because of the effect she achieved of many layers of harmonic space.

She was born in Chelsea, Massachusetts, and was much influenced by her mother who was an amateur artist. Pereira began art lessons at the age of fifteen but took a secretarial job to help support her family because her father had died. She took night classes at the Art Students League in New York City, and at age twenty-one married the first of her three husbands, Humberto Pereira, whose name she kept. She traveled extensively in Europe and North Africa and was much inspired by the expansive vistas of the Sahara Desert.

Returning to New York, she began incorporating these visions into her work, becoming increasingly experimental in her styles and methods. She layered transparent materials over each other to show depth.

In 1942, she married George Brown, an engineer, who helped her experiment with a variety of materials. By the 1950s, she became more interested in writing poetry and, divorced from Brown in 1952, she married George Reavey, an Irish poet. From that time, she wrote extensively and published ten books of poems and essays and was even named Poet Laureate of the Philippines. In 1959, she divorced Reavey.

She died at the age of sixty nine in Marbella, Spain.