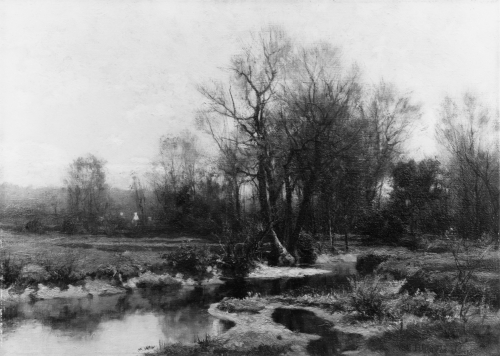 A native of Maryland, H. Bolton Jones rose to prominence as a landscape painter in the late nineteenth century.  He was born in Baltimore in 1854, and began his career with study at the Maryland Institute [now the Maryland Institute College of Art].  He subsequently moved to New York City, where he was exposed to the work of many of the prominent Hudson River School painters.  In 1865, he studied with Horace Wolcott Robbins, Jr., who had just returned from a year of travel with Frederic Edwin Church in Jamaica and the Caribbean.  Two years later Jones had exhibited his paintings at the National Academy of Design.  Jones followed the example of many of his colleagues by traveling around the country painting sketches en plein air.

As Michael Zellman points out, Jones painted many of the traditional landscape motifs that Hudson River School artists depicted in the eastern part of the U.S. from Maryland and West Virginia north to the Berkshire Mountains of Western Massachusetts between 1865 and 1876.(1)  In 1876, Jones and his brother Francis Coates began a four-year sojourn to Europe, where he observed traditional French and German landscape paintings.  He joined the artist colony on the North coast of France in Pont-Aven, Brittany.  Other post-Civil War painters frequented this area as well, including genre painter Thomas Hovenden, an acquaintance of Jones.(2)

Upon his return to the United States, he settled in New York but purchased a summer cottage in South Egremont.  H. Bolton Jones was elected to the Society of American Artists in 1881 and to the National Academy of Design in 1883.  He was also a member of the American Water Color Society, the National Institute of Arts and Letters and the National Arts Club.  He won medals for the paintings he submitted to the Columbian Exposition in Chicago in 1893; at the 1889 and 1900 Paris Expositions; at the 1904 St. Louis Exposition and at the 1915 Panama-Pacific Exposition in San Francisco.  His paintings are included in the permanent collections of the Metropolitan Museum of Art; the Pennsylvania Academy of Fine Art; the Corcoran Gallery of Art, and the Brooklyn Museum.  The artist died in 1927 in New York City.

Jones probably painted Berkshire Mountains (South Egremont, Massachusetts) in the last part of his ten-year East Coast painting excursion preceding European travels.  The composition shows obvious Hudson River School influence in the rendering of brilliant midday light and attention to the natural, botanical details of the scene.  Despite the Barbizon-like rendering of light and shadow, executed with an energetic brushstroke, the painting lacks the ephemeral qualities of sunlight and clouds— along with the injection of staccato stokes of reflected blue—that became the stylistic hallmarks of the next generation of American landscape painters.  In Jones, we see an artist intent on capturing the spectacle of a poetically conceived landscape, largely hidden from human inhabitants.